After recruiting Harry Maguire, Aaron Wan-Bissaka and Daniel James last summer, Manchester United did boost their attacking ranks by signing Bruno Fernandes in January. Despite starting on a low note, Ole Gunnar Solskjaer has done a good job in his first full season as the Red Devils manager. However, to take their game to the next level United must bring in reinforcements this summer.

In that case, the Red Devils have been linked with a move for some of the best in the business of late. England and Borussia Dortmund winger Jadon Sancho is a top target for United, as per The Sun.

21-year-old West Ham midfielder Declan Rice, who has become a key member in the Hammers midfield, has also been linked with a move to Old Trafford, according to The Express.

United loanee Dean Henderson, who has been in terrific form could make his move permanent elsewhere as he may not return to play second-fiddle, as per The Mirror. And therefore, Solskjaer must look to make him the first-choice in the next season.

Let’s take a look at how United could line up with all the aforementioned players in the team.

Having spent the majority of his career on loan, Henderson has peaked this season and is one of the best goalkeepers in the league. He would be a perfect upgrade on the underperforming David De Gea. The youngster has the ability to succeed at a higher level.

He has been sensational for United in the past few months. After struggling to make forward runs in his initial days at Old Trafford, Bissaka has truly fixed his spot in this position.

The Swede has been dribbled past only on a few occasions and has kept the defence in shape. He should be the ideal partner for Maguire at the heart of the defence.

The most expensive defender in Europe has been lively in the past few months, helping United keep 9 clean sheets in their last 11 games. He has led the team brilliantly since taking over the armband.

Though Brandon Williams kept him out of the team for some time, Shaw has taken his game to the next level in recent times. He has shown his ability at both ends of the pitch and can be helpful to United in the coming years given he keeps himself away from injuries.

The 21-year-old is one of the best defensive midfielders in England’s top-flight and his performances haven’t gone unnoticed, with several clubs lining up a move for him. United should be able to sign him as he can be a long-term replacement for Nemanja Matic.

The Brazilian is one of the most improved players under Solskjaer this season and is one of the first names on the team sheet. He has connected well with his teammates and has claimed the spot for himself.

The Portuguese playmaker has been a breath of fresh air in the Red Devils attack. He has already racked up 3 goals and 4 assists since his arrival in January. He would be the creative hub for United and can do better with experience in the Premier League.

The English star is the top scorer for United this season and was at his best before an injury forced him out of action. He is surely a top talent and can cause troubles to the opponents with his pace and finishing.

There aren’t many who have been performing at the level of Sancho for the past couple of years. He has elevated his game and has contributed a lot beyond his tender age. With his pace and tricks, he would definitely be a valuable asset should United sign him.

The Frenchman has led the line brilliantly in the absence of Rashford and would be the first-choice striker for the Red Devils. 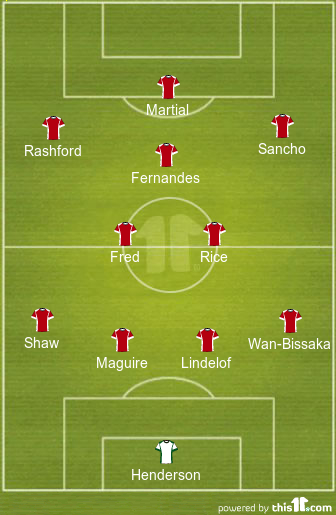