Soppy, 18, one of the best youngsters in Rennes’ youth side has featured in 3 UEFA Youth League games this season. In the process, he has provided one assist and is highly-rated within the youngsters at the club.

Meanwhile, Celtic are on course to lift the premiership title for the sixth time in as many years as they are atop the league table, leaving rivals Rangers 13 points behind them. Neil Lennon has led the team brilliantly so far.

However, the Hoops have crashed out of the Europa League after facing defeat at the hands of Copenhagen. Despite playing their best they could not overcome the test and have failed once again in the European stage.

They have enough quality and depth in every area but have failed to make a difference in the European games. Hence, the manager should look to bring in reinforcements to some key areas including the right-back position.

Moritz Bauer and Jeremie Frimpong are two natural right-backs available at Lennon’s disposal but the former is on loan from Stoke City and could move in the summer. Hatem Abd Elhamed can also play as a full-back but is already 29 and would not have much to offer in the future.

At the same time, Kristoffer Ajer, who is a centre-back by trade has featured on the right side of the backline on several occasions but is not at his best in that position. This would leave the manager with just Frimpong at right-back. Therefore, to add depth and have a player for the future, they need to bring in reinforcements.

In that regard, Rennes youngster Brandon Soppy would be a viable option for the club as he has been impressive for the youth teams. His performances haven’t gone unnoticed, with Wolves and French outfit Nice also interested in him, as per the report. 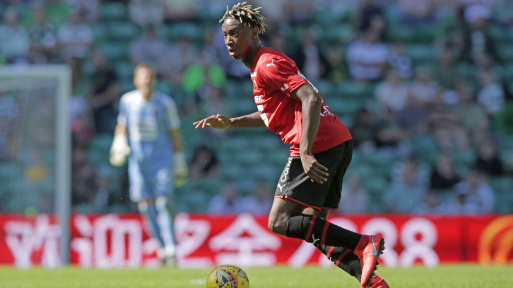 The 18-year-old can also operate as a central defender and would be a great addition to the Hoops squad for their future. His inclusion would also bring competition to the right-back spot and if he performs well, he could be their player in the long run.

Soppy is just 18 and has already shown his abilities to play at a higher level. He can develop himself under proper guidance. Therefore, Celtic must make a move for the teenager and lure him to Celtic Park in the summer.