Chelsea have an important transfer window coming up. The first season under Frank Lampard has gone fairly well so far, with the Blues in the Premier League top four. However, for them to take the step to the next level, the club should invest in the squad in the summer.

To that end, Chelsea have been linked with some of the biggest stars in the game of late. Borussia Dortmund winger Jadon Sancho, who has been in devastating form in the last two seasons, has been mooted as the Blues’ top target. (h/t Evening Standard)

Former Liverpool star Philippe Coutinho, who is currently on loan at Bayern Munich from Barcelona, has also been linked with a transfer to Stamford Bridge. (h/t Express)

Serie A sensation Lautaro Martinez, who has been one of the driving forces behind Inter Milan’s season so far, has also been touted as a priority target for Lampard & co.(h/t The Sun)

And most recently, the Blues have been credited with an interest in West Ham United midfielder Declan Rice as well. (Sky Sports)

While it would be difficult for the West Londoners to get all their targets in the summer, here we take a look at how the Chelsea lineup might look if they did succeed in signing the aforementioned players.

The Spaniard had been omitted from the side for a number of matches by Lampard. However, Kepa has come back strongly since and should hold on to his spot between the sticks for Chelsea next term.

One of the breakout stars of the 2019/20 season for Chelsea, the Englishman has shown plenty of potential in his first full season with the Blues first-team. Has what it takes to establish himself as the first-choice right-back ahead of Cesar Azpilicueta.

Injuries have held the German back this season. But given his experience, Rudiger should be trusted to lead the Chelsea defence when the next season comes along.

The Danish international did not start the season well but has gradually improved to become Lampard’s preferred option ahead of Kurt Zouma and Fikayo Tomori. And that should not change next term.

Another player who has recovered strongly from a shoddy start to the 2019/20 season, Marcos Alonso has proven his worth with some important goals this season. Should be the first-choice at left-back unless Chelsea sign any reinforcements.

The Croatian international has been one of the most consistent players for Chelsea this term, impressing with his drive and energy in the middle of the park. Should be one of the first names on Lampard’s team sheet based on his performances this season.

While Jorginho is an important cog in the wheel for Chelsea, given the defensive vulnerabilities they have encountered this term, Lampard should add more security to his backline. This would pave the way for Declan Rice to start in the holding midfield position, where he has shone for West Ham and the England national team.

The likes of Mason Mount and Ross Barkley will push for a starting berth in the final midfield slot, while new signing Hakim Ziyech would also be an option at Lampard’s disposal. But just for the purpose of this lineup, Coutinho, should he sign for Chelsea, should operate on the left side of the three-man midfield – a role in which he thrived during his successful stint at Liverpool.

There aren’t many wingers who have been performing at the level that Sancho has been doing over the past couple of years. The Borussia Dortmund star has pace, trickery on the ball, can score and assist in equal measure. A no-brainer on the right-flank for Chelsea should they get their hands on him.

Tammy Abraham might have something to say about this, given his strong performances this term. However, should Martinez arrive at Stamford Bridge in the summer, the Argentine should be the first-choice centre-forward, based on the evidence of his displays at Inter Milan this season.

The USMNT international was in fine nick prior to suffering an injury setback close to the winter break. Pulisic has shown glimpses of the quality he possesses in his first season with Chelsea and having had time to settle at the club, he should be the first-choice on the left flank next season. 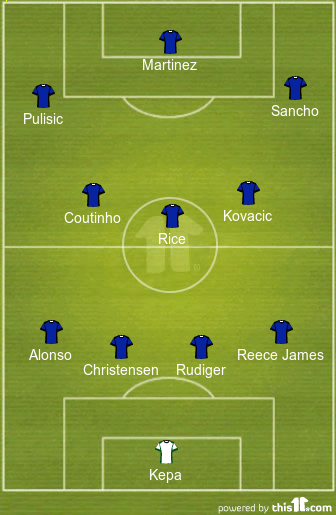