Liverpool face their biggest game of the season when they welcome Atletico Madrid at Anfield in the Champions League on Wednesday night.

The Reds tasted a 1-0 defeat to the Spanish side in the first leg of the Champions League last-16 last month. They have been in patchy form of late, with Jurgen Klopp’s men also getting eliminated from the FA Cup at the hands of Chelsea.

The reigning European champions returned to winning ways in the league with a 2-1 victory over Bournemouth on Saturday, giving them some confidence ahead of the Atletico Madrid clash.

Skipper Jordan Henderson has returned to full training on Sunday ahead of Wednesday’s game and could be in the squad.

Andy Robertson missed the Reds’ victory over Bournemouth as a precaution. Alisson also missed Saturday’s game with a hip problem sustained in training and will miss the spicy fixture on Wednesday.

Adrian will take Alisson’s place in goal, and although he has looked slightly shaky in the past two games, he is more than up to the task.

Alexander-Arnold has looked shaky at the back in the last few weeks. So, he’ll have to be at the top of his game to keep the Atletico attackers at bay.

Gomez hasn’t been at his best his of late and struggled against Bournemouth. The Englishman will have to be focused and vigilant to stop the Spanish opponents from scoring on Wednesday.

A leader and a commanding presence at the back, Van Dijk will partner Gomez in defence and the duo will aim to keep a clean sheet.

Andy Robertson is set to come back in at left-back after being rested against the Cherries.

Liverpool have sorely missed Henderson’s presence in the middle of the park in the last few games and his inclusion will be a massive boost for Klopp’s side.

Wijnaldum has been a regular fixture in midfield since the start of the season. He’s a certainty to start against Atletico.

With 20 goals across all competitions, Salah is a potent forward and can single-handedly win games for his side. The Egyptian will start on the right flank.

One of the best players in the Premier League, Mane scored in the 2-1 victory over Bournemouth on Saturday. The Senegalese will be key in opening up Atletico’s resolute backline.

The Brazilian makes the Reds attack tick and is dangerous in the box. He’ll be eager to get on the score sheet on Wednesday. 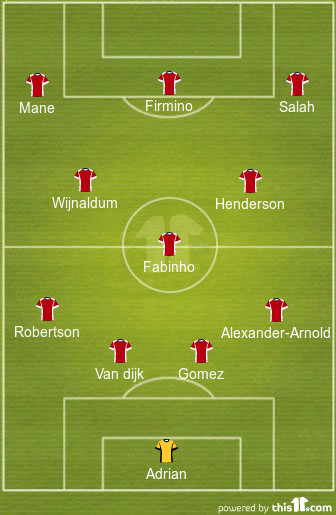