Tottenham Hotspur will head to RB Leipzig in the Champions League on Tuesday night looking to overturn a 1-0 deficit from the first leg of their last-16 tie.

RB Leipzig outplayed Spurs in the first leg, registering a crucial win and an away goal, thanks to Timo Werner’s second-half penalty. That home defeat to Leipzig marked the beginning of a run of five competitive matches without a win.

Jose Mourinho has seen his side’s hopes in the race for top four falter in recent weeks and they also got dumped out of the FA Cup by Daniel Farke’s lowly Norwich City in the fifth round. So Mourinho should go all out to beat Leipzig in the Champions League.

Juan Foyth could potentially return as he battles back from a groin problem, while Steven Bergwijn is expected to shake off a knock to feature for the Premier League club.

Lloris returned in goal against Burnley on Saturday after missing the last two games. He’ll definitely start against Leipzig.

Aurier came off the bench against Burnley but he should be in the starting XI on Tuesday.

Sanchez’s form has been up and down for the majority of the campaign. However, the Colombian will be a part of Tottenham’s defence.

Dier has been a part of Tottenham’s defence in the last few games. The Englishman is a certainty to keep his place in Mourinho’s starting XI.

Alderweireld has been one of the most consistent members for Tottenham in the past few years but his performance has not been up to the mark this season. Yet, he is a certainty to start in the upcoming Champions League fixture.

Vertonghen has not enjoyed the best of seasons with Tottenham, with age seeming to catch up with the Belgian. However, he should be picked ahead of Davies at left wing-back.

Winks was an unused substitute against Burnley but as he has been a regular fixture under Mourinho, the Englishman should start in midfield at Leipzig.

A creative player, Lo Celso will be a key presence for Spurs in opening up Leipzig’s stubborn defence. The Argentine could be paired with Winks in the middle of the park.

Lamela is a right-winger who is crying out for more opportunities and his recent performances suggest he can improve a team that is now on a run of five matches across all competitions without a win.

Moura came on as a substitute at Burnley at the weekend and he would be reasonably fresh to add some extra energy and pace against Leipzig.

Alli scored a second-half penalty and cancelled out Chris Wood’s opener at Turf Moor at the weekend. The England international should start in the No.9 role on Tuesday. 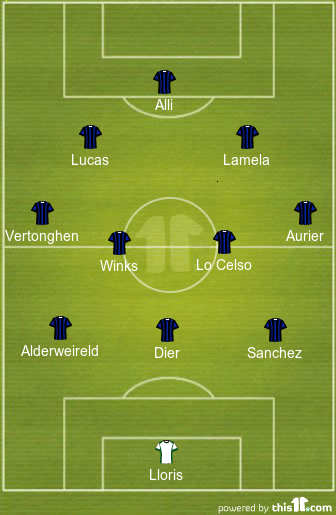