Manchester United travel to Goodison Park to play Everton on Sunday, hoping to make it three wins on the bounce in the Premier League.

The Red Devils thrashed 10-man Club Brugge in the second leg of Europa League round of 32 on Thursday, winning by an aggregate scoreline of 6-1 and booking their spot in the competition’s next round. Prior to the Club Brugge game, they defeated Watford 3-0 in the Premier League.

Ole Gunnar Solskjaer’s men have been in good form in recent weeks but they’ll be wary of Everton, who come into Sunday’s fixture on the back of a 3-2 defeat at Arsenal.

Anthony Martial missed the second leg against Club Brugge following a knee injury and is a doubt for the trip to Everton. Other than the Frenchman, Solskjaer has no fresh injury concerns ahead of Sunday’s game.

De Gea was a part of the Manchester United bench against Brugge on Thursday but he’ll walk straight back into the starting XI against Everton.

Wan-Bissaka has been a consistent performer in what is his debut season at Old Trafford. He should start at right wing-back on Sunday.

Lindelof was an unused substitute on Thursday in the Europa League but he will be a part of United’s three-man backline against the Toffees.

Maguire helped Manchester United keep a clean sheet against Brugge on Thursday. He’ll be aiming to keep the Everton forwards at bay.

Shaw has been excellent over the last few weeks for United, excelling as a left centre-back. The 24-year-old, however, will have to be at the top of his game to help the visitors keep a clean sheet in Merseyside.

Williams has not played in United’s last two games, so he’ll be fresh to face Carlo Ancelotti’s side.

Scored two goals in United’s 5-0 rout of Brugge on Thursday. The Brazilian, who has been in good form over the last couple of months, will look to dictate the tempo of the game at Everton.

McTominay scored in the big victory over Brugge in the Europa League in midweek. He’s made an instant impact after coming back from injury and deserves to keep his place in the midfield.

Fernandes has enjoyed a remarkable start to his career at Old Trafford since joining the club from Sporting CP, scoring two goals and assisting as many in five games across all competitions.

Ighalo got his first goal for the club on Thursday in the Europa League since his deadline day loan move from Shanghai Shenhua. With Martial a big doubt, the Nigerian could make his first league start for Man United.

James’ form has dipped after a bright start to his United career. However, the Welshman gives Solskjaer’s side a lot of pace and energy in the attack. He could start up front with Ighalo. 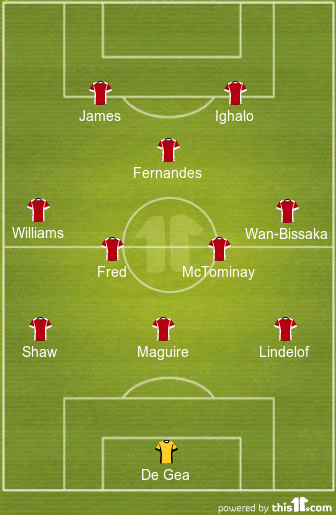