Leeds United travel to KCOM Stadium to face Hull City on Saturday looking to make it four wins on the bounce in the Championship.

The Whites defeated Middlesbrough 1-0 at the Riverside Stadium on Wednesday, thanks to a goal from Mateusz Klich. The victory has left five points clear of Fulham and on course for automatic promotion.

Marcelo Bielsa will now expect his boys to put in an improved display and get another three points at Hull City at the weekend.

Kalvin Phillips was forced off against Reading last weekend with a big knock to his calf muscle in the first half. That saw him miss the Middlesbrough game and he could be out for Saturday’s clash as well. Jean-Kevin Augustin has a muscular problem in his hamstring and should be out as well.

Three consecutive clean sheets in a row should have given Casilla a lot of confidence. He’ll be in goal on Saturday and will look to make it four shutouts in a row.

Ayling has nailed down his position at right-back. He’s a certainty to be a part of Bielsa’s backline against Hull.

Berardi was handed a start in midweek against Middlesbrough and helped Leeds United keep a clean sheet. That could see him start again at the weekend.

A leader at the back, Cooper will partner Berardi in central defence and aim to keep the Hull forwards at bay.

The versatile Dallas did a good job at left-back against Middlesbrough on Wednesday. He will complete the Whites’ back-four on Saturday.

White has been a consistent performer for Leeds throughout the season. He did a decent job in the holding role at Middlesbrough and is likely to continue in that role due to Kalvin Phillips’ injury.

Costa adds flair and pace to the Leeds attack. He’s become an important player for Bielsa should start on the right flank at Hull.

Hernandez has shown signs of getting back to his old self with some good performances of late. The Spaniard will keep his place in Bielsa’s starting XI.

Klich scored the only goal against Middlesbrough which turned out to be the winner in the end. The Pole will be raring to get himself on the score sheet at the weekend when Leeds travel to Hull City.

Harrison has improved by leaps and bounds this season, nailing down his position in the starting XI. He will be crucial in opening up the Tigers at the KCOM stadium.

Bamford looks bereft of confidence and energy, with goals drying up of late. But with Augustin injured, Bielsa will have to stick with the 26-year-old up front. 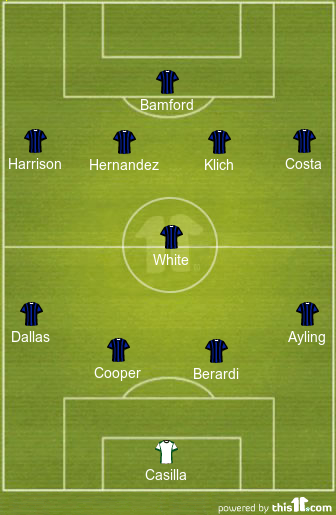