Leeds United make the trip to Middlesbrough on Wednesday evening, having strengthened their grip on second place in the Championship table. The Whites recorded back-to-back victories against Bristol City and Reading, meaning that they’re comfortably on track to secure a top-two finish. They are in an excellent position to end their 16-year exile from the Premier League after getting back to winning ways. Middlesbrough, meanwhile, are embroiled in a relegation battle after a succession of poor results in 2020.

Kalvin Phillips was forced off with a dead leg in the 1-0 win over Reading and the midfielder will certainly miss Wednesday’s clash at the Riverside Stadium. Other than Phillips, Marcelo Bielsa has no fresh injury concerns ahead of the game.

Two back-to-back clean sheets should have given Casilla a lot of confidence ahead of Wednesday’s game. The Spaniard will continue in goal.

Ayling has nailed down his position at right-back and should start against Middlesbrough.

One of the first names on the team sheet, White has been a model of consistency for Leeds United this season. There’s no reason for him to miss out on the trip to Middlesbrough.

Partnering White in central defence should be Cooper and the duo will aim to keep a clean sheet at the Riverside Stadium.

Dallas’ position could change on Wednesday following Phillips’ injury, resulting in Alioski coming back into Bielsa’s side at left-back.

Dallas is likely to replace the injured Phillips in the holding role against Boro. The Northern Irishman will have a big void to fill as Leeds aim to secure three consecutive victories.

Quick and unpredictable, Costa could cause problems to the shaky Boro defence. He will keep his place on the right flank.

Hernandez capped off a fine performance against Reading by scoring the winner. The Spaniard showed signs of getting back to his old self and must look to build on that performance.

Klich will be the player who would link the midfield and the attack at Middlesbrough. The Pole is a certainty to find himself in the Leeds XI.

Harrison has been a revelation for Bielsa’s side this season, scoring five goals and supplying six assists in the league for the promotion-chasers. The Englishman will retain his place on the left flank.

Failure to score against Reading means Bamford’s run without a goal has now been extended to five games. Yet, he has Bielsa’s confidence and should lead the attack against his former club at the Riverside Stadium. 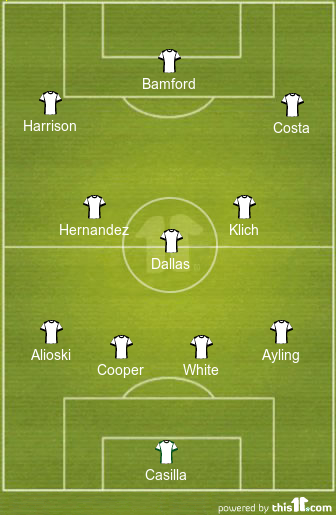