Wolves predicted lineup vs Espanyol in the Europa League

Wolves travel to Espanyol in the Europa League last-32 second leg on Thursday following a thumping first-leg victory at the Molineux.

Nuno Espirito Santo’s side thrashed Espanyol 4-0 last week, thanks to a fantastic hat-trick from Jota and a sweet long-range striker from Ruben Neves. The result at Molineux means Wolves have virtually one foot in the Europa League last 16.

Espanyol are bottom of the La Liga and will need something momentous to qualify for the next round.

Jonny Castro is likely to miss out on Thursday’s game with an ankle injury sustained against Norwich on Sunday.

Patricio kept a clean sheet at home against Espanyol last week and Norwich City over the weekend. He’ll be keen to shut the shop in Spain.

Doherty has been a regular this season and is expected to start at Espanyol on Thursday.

Boly has returned stronger from the knee injury, making Wolves a tight unit at the back once again. He will definitely start in the three-man backline in midweek.

One of the first names on the team sheet, Coady will have to be at his best to stop the Espanyol forwards.

Saiss is a defensive midfielder but he has done well in defence this season. He’ll retain his spot at the back for Nuno’s side.

With Jonny likely to miss out, Vinagre should be the Spaniard’s ideal replacement at left wing-back. The youngster should look to make the most of the opportunity and impress his boss.

Dendoncker will sit deep and shield the Wolves backline on Thursday. His presence will add robustness and energy to the midfield.

Scored a fantastic long-range goal in the first leg victory over Espanyol in the Midlands. The Portuguese will partner Dendoncker in the middle of the park and look to keep things simple.

A tricky customer, Podence can cause problems to the Espanyol defence. The Portuguese will aim to make a big impression should he get a chance to start on Thursday.

Neto has done well whenever given chances this term. He should get the nod ahead of Traore on the right flank.

Jota followed his hat-trick against Espanyol with a brace in the 3-0 victory over Norwich on Sunday. Due to his form of late, the Portuguese deserves to keep his place in the starting XI. 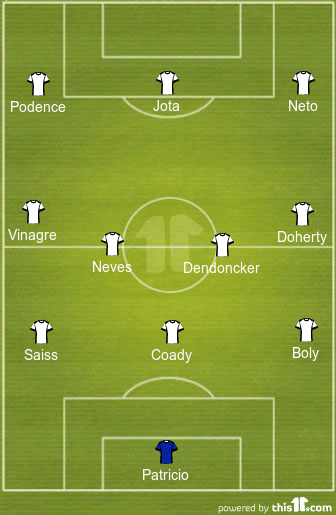