The Red Devils scored a precious away goal in Belgium through Anthony Martial after Emmanuel Bonaventure had given the hosts the lead. With the tie still in the balance, Solskjaer’s side will have to be at their best to go into the Europa League’s next round.

Manchester United registered a 3-0 victory over Watford on Sunday and will enter this tie high on confidence.

Solskjaer has no fresh injury concerns ahead of the Club Brugge game.

Romero made a rare mistake by coming off the line in the first leg in Belgium that allowed Emmanuel to loft the ball over him and into the back of the net. The Argentinean shot-stopper will be raring to redeem himself with a top display in the second leg.

Wan-Bissaka has been a consistent performer in what is his debut season at Old Trafford. He’ll retain his place at right-back.

Maguire helped Manchester United keep a clean sheet against Watford on Sunday. He’ll be aiming to keep the Belgian outfit at bay on Thursday.

Partnering Maguire at the back should be Lindelof, who has to be vigilant to stop Emmanuel and co. at Old Trafford.

Shaw has been excellent over the last few weeks for United, thriving in a three-man backline. However, the Englishman is likely to start at left-back on Thursday.

Fred was subdued against Watford on Sunday as the visitors targeted him in packs. However, the Brazilian will be raring to put in a much-improved performance against Brugge at Old Trafford.

McTominay returned to action as a substitute against Watford after a lengthy injury spell. The Scotsman could be thrown straight into the starting XI on Thursday.

Greenwood scored a fantastic goal against Watford on Sunday, which made it 11 goals for the season across all the competitions. The teenager should retain his place on the right flank.

Man United new boy Bruno Fernandes has made a brilliant start to life at Old Trafford and scored his first goal for the club against the Hornets on Sunday. The Portuguese midfielder has had an immediate impact on this team, sparking Solskjaer’s team into life and giving them greater direction.

James’ form has faded in the last couple of months but he did deliver a solid performance against Nigel Pearson’s side at Old Trafford. That could be enough for the Welshman to start in the upcoming Europa League fixture.

With a juicy fixture against Everton on Sunday, Solskjaer could be tempted to ring in the changes in attack but given the form Martial has been of late, the United manager should look to persist with the Frenchman up front. Martial, who scored a brilliant solo goal at Brugge, will be aiming to get on the score sheet again on Thursday. 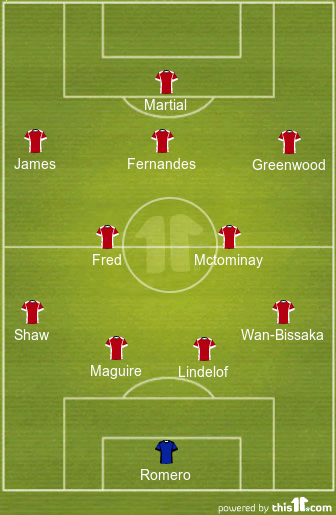