League leaders Liverpool welcome West Ham at Anfield on Monday aiming to bounce back from their midweek Champions League disappointment.

The Reds are unbeaten in the Premier League this season, dropping points only once during their 1-1 draw with Manchester United at Old Trafford. Jurgen Klopp’s men will be eager to bounce back from losing 1-0 to Atletico Madrid in the first leg of their Champions League last-16 clash on Tuesday night.

Meanwhile, West Ham are in 18th position in the Premier League table and a point from safety following a six-game winless run under David Moyes.

Jordan Henderson has been ruled out for around three weeks due to a hamstring injury. Klopp has no other fresh injury concerns ahead of the West Ham clash, however.

The Brazilian shot-stopper has been terrific in the Premier League and will be hoping to keep a clean sheet against West Ham.

Alexander-Arnold has enjoyed an excellent campaign for Liverpool, contributing with two goals and 10 assists. He’s a certainty to start at right-back.

Gomez has impressed with his performances this year and deserves to keep his place intact in Klopp’s XI.

Klopp could freshen up his backline by handing Van Dijk rest on Monday and handing Matip a start against Moyes’ West Ham.

There could be further changes at the back, with Milner starting ahead of Robertson at left-back.

Fabinho acts as a shield to the Reds’ backline and his main job will be to stop West Ham’s play in the final third.

Oxlade-Chamberlain adds pace and power to Liverpool’s midfield. He’ll start on the right-hand side of the midfield three.

A busy player, Wijnaldum covers every blade of the grass and makes things tick in the attack for the Reds. He will complete Klopp’s midfield trio.

The Egyptian will be eager to make a mark against the Hammers and help Liverpool bounce back to winning ways after the Champions League defeat to Atletico Madrid.

Minamino has had a tough start to life at Anfield following his January move from RB Salzburg. The Japanese is a versatile attacker but he’ll be stationed on the left flank against the Hammers next week.

Origi is a very quick forward who’ll look to take his chance with both hands against West Ham. 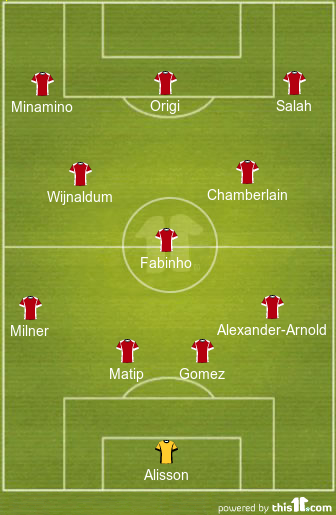