Manchester City travel to Santiago Bernabeu to face Real Madrid on Wednesday in the first leg of Champions League round of 16.

The Cityzens are in decent form of late, having won three out of their five Premier League games. They come into this contest on the back of a 1-0 victory over Leicester City on Saturday.

Even after Real Madrid’s tepid league defeat to Levante on Saturday, facing the Spanish giants in the last 16 is an uphill task, so Pep Guardiola’s Manchester City will have to be at their best in every department at Santiago Bernabeu.

Aymeric Laporte was tired in the second half against Leicester and signalled towards the bench before being quickly taken off. The Frenchman, however, isn’t injured and is fit to face Real Madrid. Man City don’t have any fresh injury concerns ahead of Wednesday’s game.

Ederson is City’s undisputed first-choice goalkeeper and should start against Real Madrid.

Walker is a crucial member of City’s backline since the start of the season. He’ll keep his place at right-back.

Despite his advancing years, Fernandinho has looked sharp this season and would start in central defence again on Wednesday.

Laporte’s experience and leadership skills make him massive at the back and Man City have three clean sheets since his return.

Mendy has performed decently in the last two games and is expected to get the nod ahead of Zinchenko at left-back.

Man City’s midfield is incomplete without De Bruyne. The Belgian is a midfield maestro who should start without any competition for this position.

Rodri brings stability and calmness to Guardiola’s side. The Spaniard will sit deep and dictate the tempo of the game.

Gundogan has been a regular fixture for City this season. The German helps Guardiola’s side tick over with his passing skills and reading of the game.

Silva has been growing from strength to strength after losing form in the initial stages. He will be a key component in opening up Real’s defence.

Mahrez has nailed down his spot on the right flank with a series of fantastic displays this season. With his pace, dribbling skills and movement, the Algerian could cause a lot of problems to Real’s backline.

A clinical finisher, Aguero should start ahead of Jesus in such a big game against Zinedine Zidane’s Real. 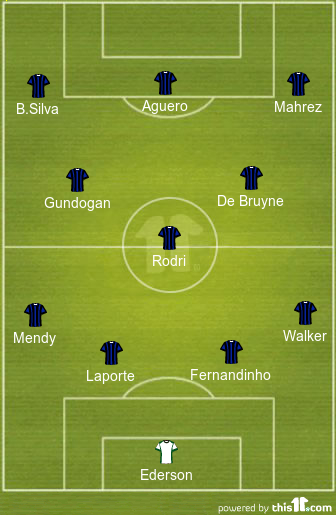