Arsenal welcome Everton at the Emirates Stadium on Sunday, hoping to make it back-to-back wins in the Premier League.

The Gunners thrashed Newcastle United 4-0 last weekend, ending a run of four consecutive league draws. On Thursday evening, they snatched a precious away goal against Olympiacos in the first leg of Europa League round of 32, with Alexandre Lacazette scoring in the second half.

Mikel Arteta’s Arsenal are 10th in the table and just two points below Everton, who have won their last two league fixtures against Watford and Crystal Palace respectively.

Sokratis Papastathopoulos was forced off injured in the second half against Olympiacos and could miss out on Sunday.

Lucas Torreira and Mesut Ozil were not involved in Greece in the Europa League but they are likely to return against Everton. January signing Pablo Mari impressed in his start for Arsenal’s U-23s on Monday and could be involved at the weekend.

Three clean sheets on a spin in all competitions should’ve given Leno a lot of confidence. The German will be in goal on Sunday.

Bellerin was not involved against Olympiacos but he will return to Arteta’s starting XI against Everton at the Emirates Stadium.

Mustafi has done well of late, showing signs of building a strong partnership at the back with Luiz. He is expected to continue in the heart of the defence.

The Brazilian will lead his troops from the back against an in-form Everton side.

Saka has mightily impressed in an unusual left-back role, showing great energy and ability going forward. The teenager will definitely keep his place in the team.

Xhaka would be expected to play an anchoring role for the team. He’ll have to be at his best to nullify Everton’s midfield.

A smart technician on the ball, Ceballos has the ability to pick a pass in the final third. However, the Spaniard will need to be disciplined while facing a pacey Everton side on Sunday.

Pepe came on as a substitute against Olympiacos but he is expected to start for Arsenal in the upcoming league fixture. The Ivorian will look to cause problems to Everton’s shaky backline and get on the score sheet.

Ozil should be back in his preferred No.10 role after not being involved in Greece in the Europa League. The German will be key in unlocking the Toffees defence.

Despite the team failing on several occasions, Aubameyang has been delivering continuously for his side. He would be hoping to make a strong impression at the weekend as well.

With two goals in the last two appearances, Lacazette has found some rhythm. The Frenchman will be hoping to get on the scoresheet again after scoring the winner at Olympiacos in Greece. 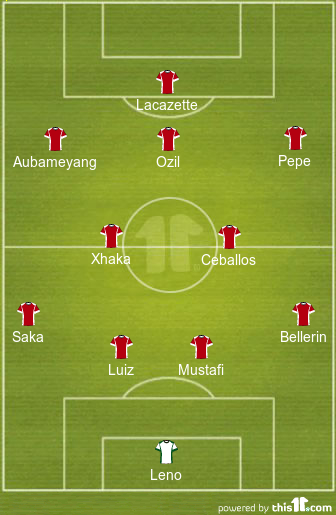