Wolves entertain Espanyol at the Molineux on Thursday evening in the first leg of the Europa League round of 32.

The Wanderers were the runners-up in Group K, amassing 13 points in six games and finishing behind SC Braga. Nuno Espirito Santo’s men have not been in great form of late, having won just once in their last five games in all competitions. However, they’ll be keen to bounce back to winning ways after drawing 0-0 with Leicester City in the Premier League.

Ruben Vinagre is the only player out injured for Wolves at the moment.

Patricio kept a clean sheet against Leicester last time out and will be aiming to shut the shop against Espanyol.

Doherty has been a regular this season and is expected to start in this high-intensity fixture.

Boly’s return from injury has strengthened Wolves’ backline. He’s a certainty to start in the European clash against Espanyol.

One of the first names on the team sheet, Coady will lead his team out from the back at the Molineux on Thursday.

Saiss is a defensive midfielder but he has done well in defence this season. He’ll be a part of Wolves’ backline against the Spanish outfit.

The Spaniard hasn’t been at his best but is expected to help the team’s attack from the left. He would retain his spot.

He would be the key to stopping Espanyol from taking control of the game. The Portuguese midfielder will start for sure.

One of the most influential members of the team, Moutinho has forged a strong partnership with Neves in the middle of the park. He will start this game after coming off the bench against Leicester City.

Traore has been a revelation for the team on the right flank. His pace and power could be a menace for the Espanyol defenders.

Jota hasn’t been effective in the Wolves attack this season. Yet, the Portuguese should start on the left flank.

The Mexican has been in sublime form this season and has 9 goals in 11 Europa League games this season. He should continue to lead the attack for Nuno’s side. 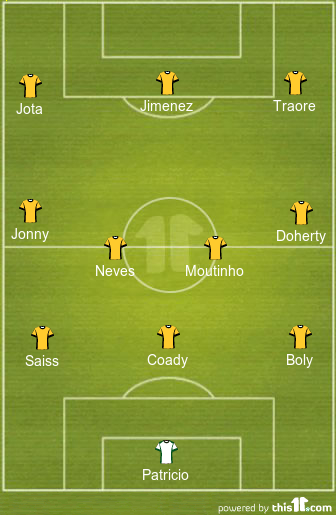