Tottenham play host to RB Leipzig at the Tottenham Hotspur Stadium on Wednesday in the first leg of the Champions League round of 16.

Spurs have hit form domestically with three wins in a row with the latest coming in an exciting 3-2 victory over Aston Villa at Villa Park. The result means they are only a point behind fourth-placed Chelsea, who host Manchester United on Monday.

RB Leipzig, meanwhile, have enjoyed an outstanding season in the Bundesliga under Julian Nagelsmann and will aim to get a crucial away goal on Wednesday.

Erik Lamela was absent for the win against Aston Villa at the weekend due to a muscular injury and remains doubtful for this game. Juan Foyth also missed the weekend victory with a groin strain and is likely to miss out again.

Since returning from injury, Lloris has done very well in goal and should start against Leipzig on Wednesday.

Aurier looks like a man reborn ever since Mourinho arrived at Tottenham. He has looked confident going forward but needs to improve defensively.

The young defender finally seems to have secured a spot in the side. Sanchez will partner Alderweireld at the back.

Alderweireld had an eventful game against Aston Villa on Sunday. The Belgian has been a regular fixture under Mourinho and should start in defence.

The return of Davies against Aston Villa was a major boost and he could be the missing piece in the Tottenham defence having produced a solid display.

Winks has been a regular fixture under Mourinho and the Englishman is a certainty to start in central midfield.

Lo Celso is another player who seems to have grown in confidence under Mourinho. The Argentinean will partner Winks in the middle of the park.

Lucas is a busy player whose pace and movement could cause problems to the Leipzig backline on Wednesday.

Alli has blown cold in the last few weeks but he has the trust of the manager and will likely keep his place in the team.

Bergwijn announced his presence in England with a scintillating goal against Manchester City. The spark he’s provided to Tottenham’s attack is particularly crucial in Harry Kane‘s absence.

Scored a brace against Aston Villa which should give him a lot of confidence heading into the European clash against Nagelsmann’s Leipzig. 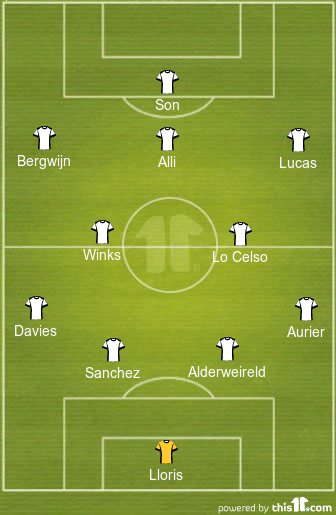