Liverpool travel to Wanda Metropolitano to face Atletico Madrid in the first leg of the Champions League round of 16 on Tuesday evening.

The Reds have looked utterly imperious all season, but one of their two losses this campaign came in this competition, all the way back in mid-September away to Napoli. They come into this game having edged a 1-0 win at Norwich City, but more importantly after a two-week winter break.

Jurgen Klopp’s side have picked up some serious momentum and are looking virtually unbeatable, but they’ll be wary of Atletico Madrid, who are presently fourth in the La Liga.

Nathaniel Clyne is the only long-term absentee for Liverpool as they welcomed Sadio Mane and Fabinho back to fold on Saturday in the 1-0 win over Norwich City.

The Brazilian shot-stopper has been terrific in the Premier League and will be hoping to continue his excellent form.

Currently one of the best full-backs around, Alexander-Arnold will cause problems for the hosts with his overlapping runs and deliveries in the box.

Following Matip and Lovren’s injury, Gomez has stepped into the team and made the position his own with a series of strong performances at the back. He’ll partner Van Dijk in central defence.

Liverpool boasts of the best defensive record in the Premier League largely due to Van Dijk’s excellent form. The Dutchman will lead his troops from the back against Atletico Madrid.

Another player responsible for Liverpool’s rich vein of form this campaign, Robertson is a certain starter at left-back.

Fabinho acts as a shield to the Reds’ backline and his main job will be to break Atletico’s attacks on Tuesday.

One of the consistent performers for Liverpool this term, Henderson is a leader on the pitch and will aim to carry out his responsibilities to full perfection.

He offers Liverpool the energy and bite that they need in the middle of the park and can come up with goals at crucial junctures.

The Egyptian is one of Liverpool’s consistent goalscorers and has netted four goals in six Champions League games this season.

Mane made his return from injury by scoring the winner against Norwich on Saturday. The Senegalese will pose a massive threat to Atletico’s defence.

The Brazilian makes the Reds attack tick and is dangerous in the final third. He is in red-hot form and can cause problems to the opposition with his movement and link-up play. 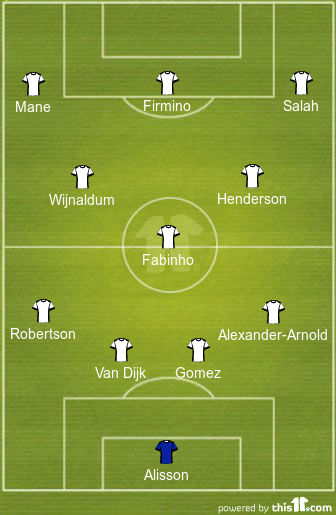