Manchester United travel to Belgium to face Club Brugge in the first leg of the Europa League round of 32 on Thursday evening.

The Red Devils clinched top position in Group L, winning four of their six games. They kept clean sheets in their first four Europa League group fixtures this term, securing qualification with two games to spare after doing the double over Partizan Belgrade.

Ole Gunnar Solskjaer’s men come into this tie on the back of a morale-boosting 2-0 victory over Chelsea at the Stamford Bridge on Monday.

Victor Lindelof missed the game at Chelsea due to illness but could be in the squad for the trip to Club Brugge. Solskjaer has no fresh injury concerns ahead of the game.

Romero is the No.2 at Man United and should start the game against Club Brugge on Thursday.

Wan-Bissaka has been one of United’s best players this season. He’s a certainty to keep his place at right wing-back after a strong display against Chelsea.

Bailly finally made his return to United’s first-team against Chelsea and delivered a fantastic performance in a back three alongside Harry Maguire and Luke Shaw. The Ivorian is likely to start against Club Brugge.

Maguire scored his first league goal for the Red Devils with a thumping header against Chelsea on Monday. After a strong display, he’ll be aiming to keep the Belgian outfit at bay.

Shaw also stuck to his guns against Frank Lampard’s side and delivered a strong performance. He’ll be a part of United’s back-three on Thursday.

Energetic and tenacious, Williams is an attacking full-back who’ll try causing problems for the opposition with his overlapping runs.

Matic has brought some stability and calmness to United’s midfield since returning to the starting XI. He is a certainty to start at the Jan Breydel Stadium.

Fred’s game has improved in the last couple of months with a simpler approach which has seen him do the basics right. The Brazilian will definitely partner Matic in the middle of the park.

Fernandes will play in the ‘free’ role ahead of Matic and Fred. The Portuguese, after a fine performance against Chelsea, will look to carve open the Brugge defence with his flair and movement.

The goal against Chelsea should have given Martial a lot of confidence heading into Thursday’s game. The Frenchman will be keen to get on the score sheet again.

Up front, Solskjaer could pair Martial with Greenwood, who has four goals in five Europa League games this season. 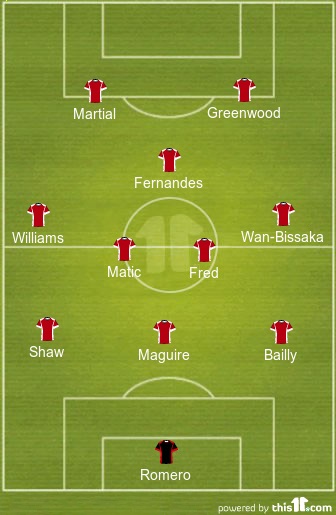