Fulham welcome Barnsley at Craven Cottage hoping to bounce back to winning ways after a 1-1 draw with Millwall in the Championship on Wednesday.

After a 1-0 win at Ewood Park at the weekend, the Cottagers headed back down to the capital full of confidence. The draw with Millwall means that the Londoners squandered their opportunity to climb into the automatic promotion places at Leeds’ expense, but Scott Parker’s men are still level on points with the Yorkshire club.

Meanwhile, Barnsley are at the rock bottom of the table and are winless in their last five games.

Anthony Knockaert missed the game against Millwall due to illness but is expected to be back on Saturday. Maxime Le Marchand has been sidelined with a long-term injury having picked up a back injury in November last year.

Alfie Mawson has missed the last five games through a knee injury and looks likely to miss this one too. Terence Kongolo remains doubtful for the upcoming fixture.

Rodak is Fulham’s first-choice goalkeeper and is expected to start against Barnsley.

Odoi has played in different positions across the backline this season but he’ll keep his place at right-back.

Hector has started the last six games in a row and should keep his place at the back against the bottom-placed club Barnsley.

Ream has been a regular fixture since the start of the season. The American will partner Hector at the back.

Bryan has been impressive with his attacking displays down the left flank. He is a certainty to be a part of Fulham’s backline against Barnsley.

McDonald was rested against Millwall as he has played a lot of late. While he was an unused substitute at the Den, he is expected to be back into the starting XI at the weekend.

Energetic and tenacious, Arter will partner McDonald in the middle of the park and look to dictate the tempo of the game.

Cavaleiro came on for the last 20 minutes against Millwall on Wednesday but couldn’t make much of an impact. With six goals and as many assists, the Portuguese has been one of the most important players for Parker this term and should start this game.

Cairney could be handed an advanced role which will give him the license to pick up pockets of spaces behind the opposition players and create openings for his teammates.

Blessed with plenty of pace and power, Reid could cause a lot of problems to Barnsley’s defenders at Craven Cottage. He’ll start on the left flank.

Mitrovic is one of the deadliest strikers in the Championship and is a certainty to lead Fulham’s attack against Gerhard Struber’s men. 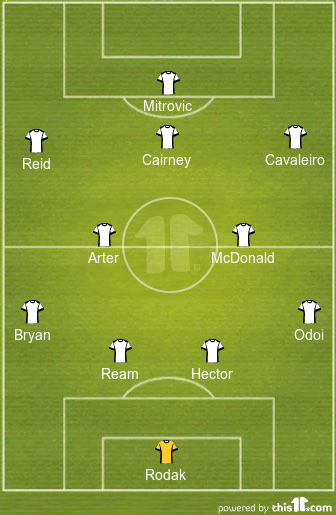