Chelsea host Manchester United on a late Monday night show at Stamford Bridge in what is expected to be a high-octane encounter.

Frank Lampard’s men haven’t won in the last three league games and desperately need to win this game. Anything other than a win would put their hopes of a top-four finish in danger with few more intense games to come before the end of the season.

In the previous league meeting between the two sides, Manchester United crushed the Blues on opening day.

Marco Van Ginkel is still recovering from a knee injury and his return to action is unknown. Whereas, Ruben Loftus-Cheek and Christian Pulisic are doubtful for the game despite returning to training.

The Spaniard seems to be completely out of form and was benched in the last outing. He is the first-choice in goal for the Blues and must return to the line up ahead of Willy Caballero.

James has been outstanding whenever he is called upon. He has been starting regularly in the last few games and should continue at the right-back.

The German would be boosted from the 2 goals he scored against Leicester City but needs to improve in defensive situations. He is expected to retain his spot.

After being benched for the majority of the season, Christensen has been preferred ahead of Fikayo Tomori. He will be partnering Rudiger in the heart of the defence.

The captain hasn’t been convincing enough throughout the season and has been shifted to the other side in recent weeks. He will be leading the team from the back and needs to help in the team’s attack.

The Frenchman has not lived up to the expectations so far in this campaign. But on his day, he has the ability to turn things around. He will be a key member of this fixture.

Despite starting the season well, the Italian has been in and out of the team for quite some time. He should start and will be key in stopping United’s attack.

The winger has contributed with 4 goals 4 assists this season. He should be starting in the right flank and needs to supply enough to the strikers. His experience will be much-needed in fixtures like these.

Mount has been one of the best players for Chelsea this season. He was at his best against the Foxes, providing both the assists for Rudiger. He will be an undoubted starter.

The Englishman must start in the absence of Christian Pulisic.

The youngster has been in fine form and would be hoping to add to his tally of 13 goals in the league. he needs to be at his best against the Red Devils. 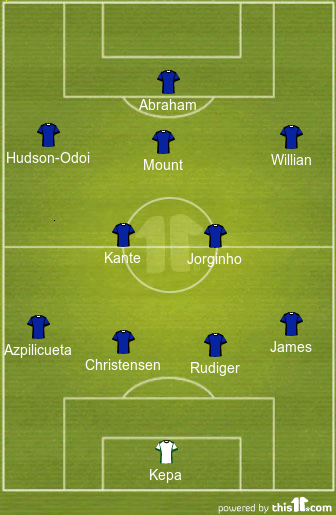