Manchester United travel to Stamford Bridge to face Chelsea on Monday night, in what is a crucial game in the race for Champions League qualification.

Ole Gunnar Solskjaer’s side sit eighth in the Premier League table, six points behind Chelsea, but can cut the gap to three with a victory in west London. They have won only once in the league in 2020 and failed to score in their last three games.

After dropping points against Burnley and Wolves at home before the mid-season break, Solskjaer and co. will hope for a positive result on Monday.

Axel Tuanzebe and Scott McTominay have returned to full training over the break, but Paul Pogba still remains out. Meanwhile, Nemanja Matic will be available against the Blues after serving a one-game suspension.

De Gea hasn’t had a great season in goal but he’ll need to be at his best to keep a clean sheet at Stamford Bridge.

Wan-Bissaka has been one of the very few shining lights in an otherwise disappointing campaign for Manchester United. He will retain his place at right-back.

Lindelof has blown hot and cold but he helped United keep a clean sheet against Wolves in the last game. The Swede will retain his place at the back.

One of the first names on the team sheet, Maguire needs to be better than what he’s shown at United so far. He’ll have to be at his best to keep Tammy Abraham at bay.

Shaw has done well in the last couple of games and could get the nod ahead of Williams at left-back.

Having served a one-game ban against Wolves, Matic will walk straight back into Solskjaer’s starting XI against his former employers.

Partnering Matic in the middle of the park will be Fred, who has been United’s best player over the last couple of months.

Mata is a creative player who’ll be key in opening up Chelsea’s defence on Monday. The Spaniard will want to prove a point at his former stomping ground.

January signing Fernandes is also set to keep his place in the team, having already made his full debut in the goalless draw against Wolves. The Portuguese will look to make a telling impact and help the Red Devils bounce back to winning ways against Chelsea.

James’ form has dipped massively over the last month or so but Solskjaer will likely go with the Welshman on the left flank. His terrifying pace and movement could cause problems to Lampard’s boys.

Just like James, Martial has seen a loss in form. The Frenchman has struggled to deliver the goods in Rashford’s absence but will be keen to make a mark at Chelsea next week. 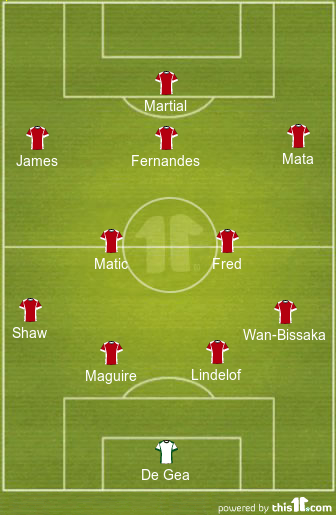