Liverpool travel to Carrow Road to face Norwich City on Saturday as they look to extend their lead at the top of the table to 25 points.

The Reds are unbeaten in the league this season, having only dropped points to Manchester United at Old Trafford. They will be keen to continue their winning run against basement club Norwich City.

The Canaries have not enjoyed their return to the top-flight as they currently lie bottom of the table, seven points off 17th-placed Aston Villa.

Sadio Mane and James Milner are back training having recovered from respective injury problems. Xherdan Shaqiri has also been using the mid-season break to recover from his latest injury and should be in contention to play some part at Carrow Road.

Alisson is Liverpool’s undoubted no.1 and has kept 11 clean sheets this season. He’ll be keen to make it 12 at Carrow Road.

Currently one of the best full-backs around, Alexander-Arnold has nailed down his place in Jurgen Klopp’s side. He is a definite starter at the weekend.

Following Matip and Lovren’s injury, Gomez has stepped into the team and made the position with a series of strong displays at the back. He’ll partner Van Dijk at the back.

A leader and a commanding presence at the back, Van Dijk is undoubtedly the best defenders in the Premier League. He’s one of the first names on the team sheet and should start on Saturday.

Robertson is a crucial player for the Reds, always willing to go forward and contribute to his team’s attacks. He’ll retain his place at left-back.

Wijnaldum will keep his place on the left of the midfield and will be hoping to make a mark this weekend. He has missed only one league game this season.

Fabinho will act as a shield for Liverpool’s defence. He will be the key to dictating the tempo of the game and stopping Norwich’s attacks.

Oxlade-Chamberlain can play in various positions across midfield and attack but he could be deployed in the middle of the park against the Canaries.

Salah’s influence goes without saying, with the Egyptian scoring 14 goals and registering six assists in the league this season.

Since joining from RB Salzburg in January, Minamino has made two Premier League appearances from the bench so far this season, featuring in the recent wins over Wolves and Southampton. He’ll look to make an impression against Norwich on Saturday.

With the first leg of Champions League round of 16 coming up next week, Klopp could look to freshen up his attack by providing Firmino rest and handing Origi a start in the number nine role. 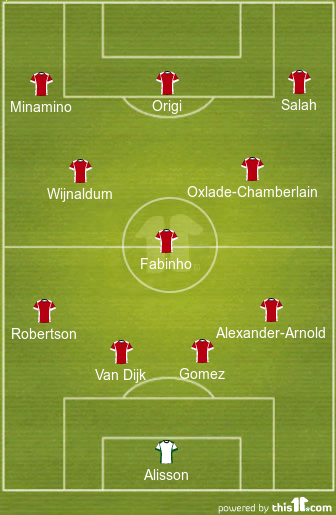