West Brom will be looking to extend their lead at the top of the Championship when they travel to Madejski Stadium to face Reading on Wednesday.

The Baggies registered a 2-0 victory over Millwall in the last game. They are currently four points clear of second-placed Leeds United, who are due to face Brentford on Tuesday.

West Brom’s opponents, Reading, look to be clear of the relegation battle for now but will be hoping to spring a surprise at home on Wednesday.

Left-back Kieran Gibbs continues to make good progress and is closing in on a return, though this clash with Reading will come too soon for him. Nathan Ferguson is undergoing surgery on the knee injury, which should keep him out for some time now.

Johnstone is West Brom’s undisputed first-choice goalkeeper and should start against Reading on Wednesday.

O’Shea scored at Millwall over the weekend as well as helped West Brom keep a clean sheet against. That could see him get another start at right-back.

Ajayi has formed a strong partnership with Bartley at the back and it is unlikely to see Slaven Bilic risk breaking it at Reading.

Bartley has been a rock at the back for West Brom this campaign. He’s an undoubted starter for the upcoming fixture.

Townsend has impressed of late and deserves to keep his place at left-back.

A defensive midfielder by trade, Livermore will look to cut out Reading’s attacks and help his team in transition.

An energetic player, Sawyers has built a strong understanding with Livermore in the middle of the park. He’s one of the most important players for Bilic and is likely to retain his place against Reading.

Pereira has been a regular feature in West Brom’s midfield this season, contributing with five goals and 11 assists. The Brazilian will definitely be part of the Baggies’ attack at the Madejski Stadium.

Krovinovic scored a really good goal in the first half against Millwall at the Den. He will be key in opening up the Reading defence on Wednesday.

A January signing from Hull City, Grosicki marked his West Brom debut with an assist as he set up O’Shea who headed home in the closing stages of the game against Millwall. That should be enough to earn the Pole a start on Wednesday.

Austin was given a break at the Den, with the striker coming on for just a minute. However, he could return to the starting XI against Reading. 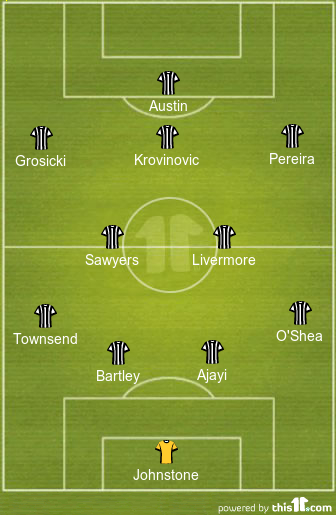