Manchester United will face a tough task when they visit Manchester City in the second leg of their Carabao Cup semi-final at the Etihad Stadium on Wednesday.

The Red Devils trail 3-1 to a chastening defeat at Old Trafford. Goals from Bernardo Silva, Riyad Mahrez and an Andreas Pereira own goal gifted Manchester City a 3-0 lead before Marcus Rashford pulled one back in the second half for the hosts.

After grim defeats to Liverpool and Burnley in the Premier League, Ole Gunnar Solskjaer’s side bounced back by smashing Tranmere Rovers 6-0 in the FA Cup on Sunday. That should give United the boost to go all out and overturn the deficit at the Etihad.

Apart from Paul Pogba, Scott McTominay and Marcus Rashford, Axel Tuanzebe, Marcos Rojo and Timothy Fosu-Mensah are also out due to fitness problems.

De Gea is United’s first-choice goalkeeper and will need to be at his best to keep Man City at bay on Wednesday.

Wan-Bissaka has been one of United’s best players this season. He should return to the starting XI after being rested in the FA Cup game against Tranmere Rovers.

Lindelof has blown hot and cold throughout the campaign but he is one of Solskjaer’s first-choice central defenders. The Swede will certainly start against Pep Guardiola’s side.

Maguire’s absence in the first leg at Old Trafford was massively felt as City ran riot in the opening 45 minutes. However, after a strong display at Tranmere on Sunday, he’ll be aiming to keep City at bay.

Shaw had a solid outing against Tranmere and will retain his place at left-back on Wednesday.

Matic has brought some stability and calmness to United’s midfield since returning to the starting XI. He is a certainty to start at the Etihad.

Partnering Matic in central midfield should be Fred, who has been a consistent performer for Manchester United in the last two months.

Martial has been used in the number nine role by Solskjaer this season, but he could start on the left flank in midweek. With his dribbling skills and movement, the Frenchman can cause problems to the hosts’ backline.

Mata adds creativity to the Red Devils’ attack and is the best player Solskjaer can have in the no.10 role from within his squad.

Dalot capped off a fine performance at Tranmere with a well-taken goal in the first half. The Portuguese has been unlucky with injuries, but now fully fit, he’ll be raring to guide United to the Carabao Cup final.

Leading United’s attack could be Greenwood, who has scored 10 goals across all competitions so far in his breakthrough campaign. 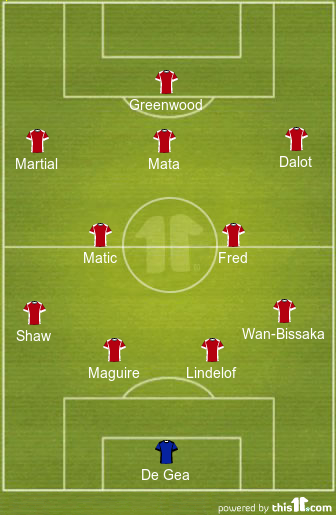