West Brom travel to South Wales on Tuesday evening looking to bounce back to winning ways against Cardiff City in the Championship.

The Baggies are on a six-game winless run in the league, with their last win coming against Birmingham City in December. But they earned a morale-boosting 1-0 victory over West Ham in the FA Cup fourth round at the London Stadium on Saturday.

Cardiff City, meanwhile, are 13th in the table and will aim to get all three points against West Brom.

Semi Ajayi is suspended for the Cardiff City game after he was sent off in West Brom’s 1-0 win over West Ham. Matheus Pereira was slapped with a three-game ban for violent conduct for a clash with Stoke’s Joe Allen and after missing the FA Cup game against West Ham, he’ll also sit out against Cardiff and Luton Town.

Loanee Grady Diangana suffered a hamstring problem against Stoke City and is certain to miss this game. But Nathan Ferguson could come back into the squad on Tuesday.

Johnstone is West Brom’s undisputed first-choice goalkeeper and should start at the Cardiff City Stadium.

Furlong has performed really well throughout the season and should start at right-back.

Bartley has been immense for West Brom. He’s a certainty to start against the Bluebirds.

Partnering Bartley at the back should be Hegazy as the duo would look to keep the Cardiff attackers at bay on Tuesday.

Townsend scored a fantastic goal on Saturday to knock West Ham out of FA Cup. The 26-year-old will retain his place at left-back for Tuesday’s game.

Sawyers has nailed down his place in the team with a string of impressive performances. He is a certainty to start against Cardiff.

Partnering Sawyers in the middle of the park should be Livermore, who was an unused substitute in West Brom’s victory over West Ham in the FA Cup.

Phillips’ form has wavered of late, with the Baggies struggling to break teams. He’ll be raring to make a mark and get back his form as quickly as possible.

Krovinovic had a good game against West Ham in the FA Cup, constantly getting into good positions and threatening the hosts’ backline. He’ll keep his place in the No.10 role.

Edwards is a player who can cause problems for the Cardiff defenders with his burst of pace and movement.

Austin had a good game against West Ham in the FA Cup, although he missed a couple of chances to score. Slaven Bilic could go with Austin up front at Cardiff City as he looks to retain West Brom’s position at the top. 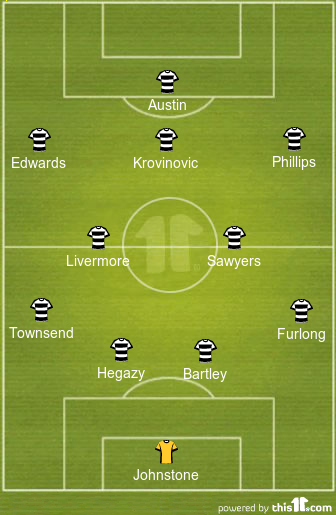