Mikel Arteta’s Arsenal will travel to the Vitality Stadium hoping to beat Bournemouth in the fourth round of FA Cup on Monday.

The Gunners defeated Leeds United 1-0 in the FA Cup third round, with Reiss Nelson scoring the winner. They come into this contest off the back of a spirited 2-2 draw with Chelsea in the Premier League, having gone a man down in the first half at Stamford Bridge.

Bournemouth, meanwhile, ended their four-game losing run in the league by beating Brighton 3-1 at home on Tuesday.

Arsenal expect Sokratis Papastathopoulos to be available for their FA Cup game against the Cherries. He came down with an illness ahead of Arsenal’s trip to Stamford Bridge and the 31-year-old defender played no part.

David Luiz was sent off in 26th minute of the 2-2 draw with Chelsea and has been slapped with a three-game suspension.

Meanwhile, Sead Kolasinac and Reiss Nelson will return to full training in the winter break period.

Martinez is Arsenal’s goalkeeper for cup competitions. He is likely to start between the sticks against Bournemouth.

Maitland-Niles was an unused substitute in the 2-2 draw with Chelsea but he will likely be recalled into the starting XI on Monday.

Mustafi was partly at fault for Luiz’s sending off on Tuesday at Stamford Bridge. The German will be desperate to redeem himself against Bournemouth.

Arsenal have been boosted with Sokratis’ availability, particularly with Luiz suspended for three games. The Greek will partner Mustafi at the back.

Saka has been excellent under Arteta, thriving in an unfamiliar left-back role. With Kolasinac and Tierney injured, the youngster will keep his place at left-back.

Due to Torreira and Xhaka’s blossoming partnership in midfield, Guendouzi has dropped to the bench. But the Frenchman will be given a chance to impress on Monday.

Xhaka has been excellent since Arteta has become Arsenal’s manager, dominating games with his passing and tackling skills. The Swiss is an undoubted starter against Bournemouth.

Pepe is slowly starting to get into the grips of Premier League football. The Ivorian could be a thorn for the Bournemouth defence on Monday.

Willock’s early-season promise has waned in the last couple of months. But the 20-year-old will be given a chance to impress in the FA Cup fourth round.

Summer signing Gabriel Martinelli has quickly become a star for the Gunners this season. He scored a brilliant equaliser against Chelsea to put Arsenal level for the first time in the match, which eventually finished 2-2. The Brazilian is likely to retain his place on the left flank.

Leading the Gunners’ attack could be Nketiah, who is raring to prove himself under Arteta. 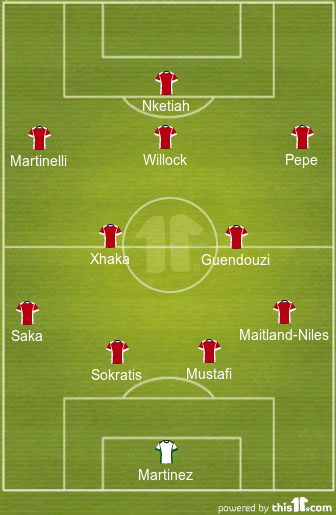