Ole Gunnar Solskjaer’s Manchester United travel to Prenton Park on Sunday to take on Tranmere Rovers in the fourth round of FA Cup.

The Red Devils lost their last two Premier League games 2-0 against Burnley and Liverpool, leaving them stationed fifth in the table. Solskjaer’s side will be raring to bounce back and advance into FA Cup’s fifth round.

United’s opponents, Tranmere Rovers overcame a much-changed Watford team 2-1 after extra-time on Thursday night and will look to spring another upset on Sunday.

Victor Lindelof has recovered from the illness that kept him out of the Burnley game. He’ll be available to face Tranmere Rovers. Meanwhile, Axel Tuanzebe will be back after the mid-season break.

Romero kept a clean sheet in the replay victory against Wolves in the FA Cup third round and deserves to start in goal on Sunday.

Wan-Bissaka has played a lot of games and needs rest, so Solskjaer could hand Dalot a start at right-back. The Portuguese has struggled with injuries but is now fit and raring to make a mark.

Lindelof has been a regular fixture since the start of the season. Having recovered from illness, the Swede will walk straight back into the starting XI.

Bailly hasn’t played a single game this season after suffering a knee injury during pre-season in July. But the 25-year-old has now attained full fitness and should partner Lindelof at the back.

At left-back position, Solskjaer could provide Brandon Williams with some much-needed rest and start Luke Shaw against Tranmere.

Matic has played continuously of late due to injuries to Scott McTominay and Paul Pogba. The Serb should retain his place in central midfield.

Partnering Matic in central midfield could be Pereira, who will be raring to put a strong display after being hauled off at half-time against Burnley.

Gomes has failed to showcase his talent under Solskjaer this season, yet he’ll be given an opportunity against Tranmere in the FA Cup.

Lingard is bereft of confidence and energy, having failed to score or assist in 19 Premier League games this term. He’ll be aiming to grab this opportunity with both hands and help Manchester United qualify to FA Cup’s fifth round.

Just like Gomes, Chong hasn’t repaid Solskjaer’s faith this season. However, he could still start at Prenton Park on Sunday.

Leading United’s attack could be Greenwood, who is a clinical finisher in and around the box. 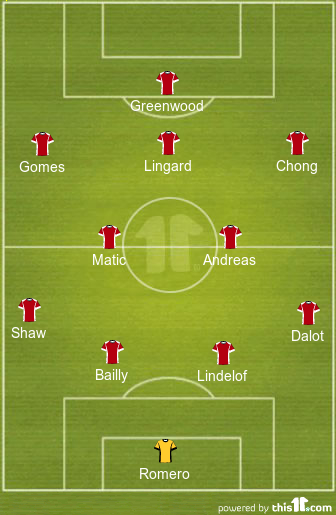