Predicted Chelsea XI to face Arsenal in the Premier League

Chelsea suffered a narrow 1-0 defeat at the hands of Newcastle United in the Premier League on Saturday, as the Blues slumped to their eighth league defeat of the campaign courtesy of an injury-time winner from Isaac Hayden.

Frank Lampard’s side now play host to London rivals Arsenal on Tuesday in what should be a highly entertaining clash between two teams who haven’t really been in top gear in recent months.

The Blues came back from behind to beat the Gunners 2-1 at the Emirates back in December and they will be hoping to strengthen their top-four credentials with all three points against Mikel Arteta’s side, who were held to a 1-1 draw by Sheffield United on Saturday.

The Spaniard didn’t really have a lot to do between the sticks against Newcastle but he could have his work cut out against a more potent Arsenal attack on Tuesday.

The skipper has been forced to play as a left-back in recent weeks but the injury to James should see him revert to his original right-back role.

The Dane has repaid Lampard’s selection with a couple of commanding shifts at the back in recent weeks and he should start ahead of Zouma and Tomori once again.

The German international somewhat lacked sharpness against Newcastle in the last game and he will be expected to pull up his socks when the Blues play host to Arsenal.

His displays at the back have been quite questionable but the Italian is currently the only fit left-back in Chelsea’s ranks, with Alonso still unavailable.

Chelsea’s metronomic tempo-setter in the middle of the park had a rather lean outing in the previous game and he will need to rise to the occasion of the London derby on Tuesday.

The Frenchman hasn’t looked all that devastating in recent weeks but he will surely be itching to stamp his authority in the high-octane clash against the Gunners.

The Croatian has been left out of the starting eleven in recent weeks but he should replace Mount, who had a very poor game against Newcastle.

A veteran of several London derbies in his career, the Brazilian winger continues to be an indispensable weapon for Chelsea in the final third.

The academy graduate lacked any real end product to his game last time around but he could retain his place in the absence of Pulisic.

Chelsea’s No.9 failed to get his name on the scoresheet on Saturday but he will be hoping for a repeat of his heroics against Arsenal last time out in December. 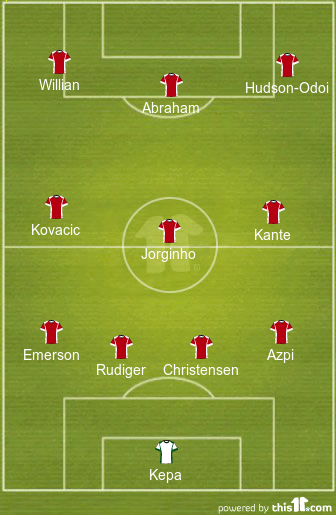