Predicted Tottenham XI to face Watford in the Premier League

Tottenham suffered a narrow 1-0 defeat against runaway Premier League leaders, Liverpool, at home last week but a victory over Middlesbrough in the FA Cup replay ensured that the Lilywhites booked their seats in the next round of the competition.

Up next for them is a trip to Vicarage Road to face Watford, who have climbed out of the relegation zone with four wins in their last five league fixtures.

The North Londoners were held to a 1-1 draw by the Hornets at home earlier in the season but they will surely be desperate to come away with all three points to close the gap on the top-four.

Mourinho has plenty of injuries to contend with ahead of the trip to Watford on Saturday. Harry Kane (thigh), Moussa Sissoko (knee), Ben Davies (ankle), Hugo Lloris (elbow) and Tanguy Ndombele (groin) are all ruled out.

The Argentine pulled off some impressive saves against Liverpool last week and he remains the club’s first-choice between the sticks in the absence of Lloris.

The academy graduate has put in a couple of impressive shifts at right-back against Liverpool and Middlesbrough and he should retain his place in the eleven.

The Belgian is one of the mainstays of Tottenham’s backline and he should be fresh to start after being rested for the FA Cup replay.

The Colombian has been prone to making the odd error in the Premier League but he has enjoyed quite a lot of involvement under Mourinho.

Mourinho has backed the former Fulham starlet with a few starts ahead of Danny Rose and the youngster has grabbed his opportunities with both hands.

The England international has been in and out of the team but he could get a start on Saturday if Mourinho opts for a double pivot in the middle of the park.

He might not be a regular goal contributor but he continues to be an asset to the midfield with his calmness and composure on the ball.

The Englishman has enjoyed a strong resurgence under Mourinho and he should be ready to start on Saturday after playing a cameo off the bench in the FA Cup replay.

The Argentine international scored a goal and impressed with a superb all-round display against Middlesbrough.

The Korean hasn’t been at his sparkling best in the last few games but he remains Tottenham’s key goal threat in the absence of Kane.

The former PSG star has stepped up in the absence of Kane to spearhead the attack with aplomb and the fans will be hoping for him to fire on all cylinders. 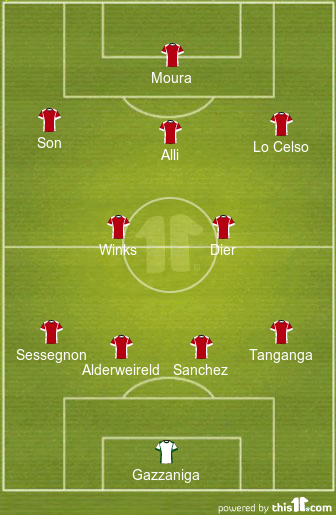