Man United romped home to an emphatic 4-0 victory over relegation-threatened Norwich City in the Premier League last week, thanks to goals from Anthony Martial, Mason Greenwood and a brace from Marcus Rashford.

The Red Devils followed it up with a 1-0 triumph over Wolves in the FA Cup replay on Wednesday night but Ole Gunnar Solskjaer’s side could be up against it when they make the trip to Anfield to face pace-setters, Liverpool, on Sunday.

United managed to salvage a 1-1 draw against Jurgen Klopp’s men at Old Trafford earlier in the campaign and they will need to pull the rabbit out of the hat once again to come away with a positive result.

Solskajer will be keeping his fingers crossed regarding the availability of top-scorer Marcus Rashford in the high-octane clash on Sunday, with the striker doubtful to feature against Liverpool due to a lower back problem.

The Spaniard pulled off an excellent save from Todd Cantwell to preserve a clean-sheet against Norwich City last week and he is likely to replace Sergio Romero, who stood between the sticks in the FA Cup tie.

The former Crystal Palace starlet has proven himself to be an excellent addition to United’s backline this season and he should surely be amongst the starters on Sunday.

The Swede has looked at the top of his game alongside Maguire at the heart of the defence this season and he will need to be on his toes to deal with Liverpool’s deadly front trio.

The England international has added a lot of steel and stability to United’s defence, setting the platform for the attackers with numerous commanding shifts at the back.

The academy graduate has really come of age to fill in admirably for the injured Luke Shaw and he certainly deserves to retain his place in the eleven after a superb all-round display against Norwich last week.

The Serb has reclaimed his role as a regular starter in the absence of McTominay and Pogba and his experience could be a key factor against a rampaging Liverpool side.

The Brazilian has come to the fore this term with some influential displays in the middle of the park and the trip to Anfield will surely be a massive test of his credentials against top-quality opposition.

The former Swansea City star has been a wonderful addition to United’s attack and his searing pace could once again make the difference against Liverpool on Sunday.

The veteran was simply a joy to watch against Norwich and his playmaking skills could come in handy in the high-voltage clash this weekend.

The Brazilian has blown hot and cold throughout the season but he still contributes a lot with his enthusiasm and work-rate at both ends of the pitch.

Martial has looked a real threat while working in tandems with Rashford but the Frenchman might need to spearhead the attack on his own against Liverpool if his partner fails to make it to the playing eleven. 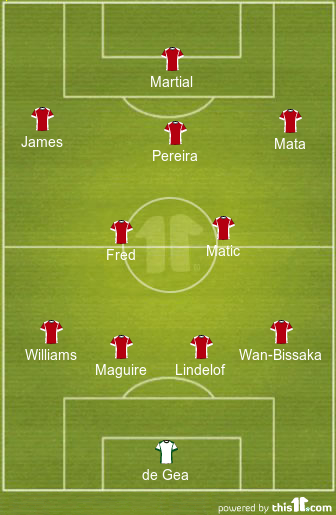