Chelsea cruised 3-0 past Burnley at Stamford Bridge in the Premier League last week, thanks to goals from Jorginho, Tammy Abraham and Callum Hudson-Odoi.

The Blues are currently placed 4th in the standings, five points clear of Man United, and they will be the outright favourites to come away with all three points when they make the trip to Tyneside to face Newcastle, who have lost three out of their last four league fixtures.

Frank Lampard’s side beat the Magpies 1-0 in the reverse fixture at Stamford Bridge and they will be hoping to strengthen their top-four credentials by completing the double over Steve Bruce’s men.

Frank Lampard will be eagerly awaiting the fitness update on N’Golo Kante, who missed last week’s victory over Burnley with a thigh injury.

Christian Pulisic (groin), Marcos Alonso (thigh), Marco van Ginkel (knee) and Ruben Loftus-Cheek (Achilles Tendon) are all on the treatment table and ruled out for the trip to St. James’ Park on Saturday.

The Spaniard had little to do against Burnley last week and he has always been the undisputed first-choice for the Blues between the sticks.

The academy graduate earned plenty of plaudits for his crossing and defensive contribution in the previous outing and he certainly deserves to be backed with another start.

The German international has restored stability at the back for Chelsea since returning from his injury and he should once again be amongst the starters on Saturday.

The Dane hasn’t had too many opportunities this term to prove his worth but he should keep his place in the playing eleven after putting in a good shift against Burnley.

The club-captain has continued to churn out impressive displays even in an unfamiliar left-back role and Lampard should continue to rely on him.

Besides dictating the play in the middle of the park, the former Napoli man has started to pull the strings for the Blues under Lampard this season and a well-taken penalty against Burnley should do his confidence a world of good.

The England international looked really neat and tidy with his passing and movement last week and he is likely to keep his place if Kante fails to make it to the eleven.

The Croatian remained an unused substitute last week but he could replace Mount in the starting eleven against Newcastle if Lampard opts to rotate his squad, with a big game against Arsenal coming up on Tuesday.

The academy graduate will be high on confidence after scoring his first Premier League goal against Burnley last week.

The Spaniard hasn’t had too many starting opportunities in the Premier League this season but with a home game against Arsenal coming up, Lampard might hand him a start ahead of Willian, who certainly needs a bit of rest.

The youngster has already plundered 13 goals in the Premier League so far this term and he will be keen to add to his tally on Saturday. 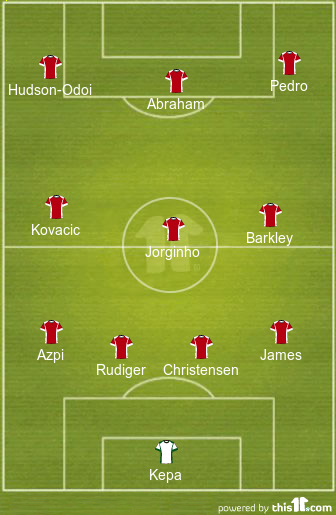