How Manchester United can line-up with Moussa Dembele

Manchester United were linked with Erling Haaland but the Norwegian international chose to join Borussia Dortmund and now, the Red Devils are linked with numerous centre forwards.

Recently, the Express reported that French striker Moussa Dembele is a strong alternative for Solskjaer. The striker’s current contract with Lyon will expire in 2023.

In the summer, the Red Devils sold first team centre forward, Romelu Lukaku, to Inter Milan and Solskjer was unable to replace him. Instead, this season, the Norwegian boss has mainly utilized Anthony Martial in the No. 9 role.

Over the years, the Les Bleus attacker has mainly played on the flanks, particularly the left wing. The former Monaco man is not an out and out centre forward and therefore, he has struggled in that role at Old Trafford. Since scoring in the first two PL games of the current campaign, the 24-year-old has only netted 7 goals in 15 league outings. So, Man United need to sign a natural out and out striker, who can consistently score goals for the team.

Here is how Man United could line up with Moussa Dembele.

De Gea has been the main man between the sticks and will look to continue this trend in spite of a few errors.

Wan-Bissaka came in to Old Trafford in summer and has uickly established himself as one of the first names on the team-sheet. He has been brilliant on the right hand side of the defence.

Maguire became the world’s costliest defender and will look to improve his performances. He has had a mixed start to his career and has been guilty of being out of position several times.

Although Lindelof has been consistent for United, Eric Bailly might be the perfect fit alongside Maguire in the centre of defence. The Ivory Coast man has been plagued by injuries but his position and athleticism is better when compared to the Swede.

Brandon Williams has had a breakthrough season and will continue to push for a spot in the eleven but with experience on his side, Shaw is expected to hold on to his place.

Mctominay has been United’s best player this season along with Marcus Rashford. He hahd shown flashed of brilliance in the past but the midfielder has become  force in the middle of the park. The team tend to struggle when the lanky midfielder is injured.

Pogba’s season has been hit with multiple injuries with his ankle being the latest cause of concern. But with a fit Pogba, United can become a real force, given the pace the attackers possess.

Martial has been primarily used as a striker but with the arrival of Dembele, Martial could play deeper and create chances. His dribbling and technical ability make him a complete player.

The academy star has been United’s star player season so far. He has shouldered the team’s responsibility and has guided them to wins with crucial goals. His performances against big teams have been phenomenal and is vital to Solskjaer’s set-up.

Daniel James has been one of the best bargain buys in recent times in the Premier League. The Welshman has adapted to the league incredibly well and his pace is a threat for any defence. He also has the ability to cut open defences with his dribbling and crossing.

The Lyon striker bagged 23 goals and picked up six assists in all competitions last season[Courtesy: Whoscored] and will be the perfect fit for Manchester United. Along with Rashford, Martial, James and the creativity of Paul Pogba, Dembele might just be the missing piece in the jigsaw to form probably the swiftest attack across Europe. 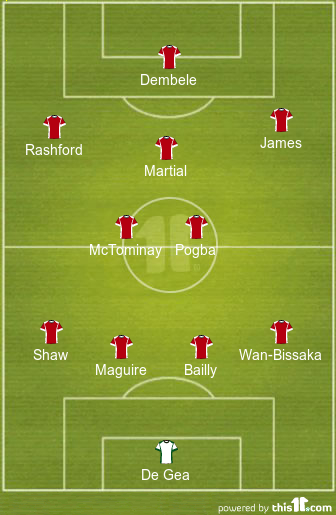