Chelsea travelled to Brighton looking to build on their impressive comeback victory over Arsenal but were stunned by a wonder strike by Jahanbaksh. The Blues have been adopting a three-man defence in recent weeks, with the set-up having proved particularly effective in the 2-0 win over Tottenham in early December.

But recent defeats to Everton, Bournemouth and Southampton have increased the pressure on the Chelsea boss, and his side were poor for long periods of the clash with Arsenal.

Lampard was forced into an early change against the Gunners, sacrificing Emerson Palmieri and switching to a 4-3-3 after just half an hour. They switched to a back four against Brighton but were unable to come away with 3 points.

Chelsea are currently fourth in the Premier League and could close the gap to Manchester City to 5 points with victory over Burnley. The Blues have been poor at Stamford Bridge, losing three of their last four league matches on home turf but will look to halt the slide against a struggling Burnley.

Here is how Chelsea can line up against Burnley.

Kepa has been the undisputed number one for Chelsea with Cabellero limited to playing in the league competitions. Kepa could do nothing to stop the strike against Brighton but must try to earn a clean sheet this time around.

Chelsea have an absolute gem in Reece James. The young full-back has impressed his manager so much that he has forced Azpilicueta to move to the left side of the defence and he has continued to go from strength to strength in this exciting Blues team.

Injuries have prevented Frank Lampard from settling on a centre-back partnership this season but with the return of Rudiger, Lampard will look to forge a partnership with Zouma alongside him.

Zouma has been the most trusted defender by Lampard this season. He struggled initially but has lived up to expectations of late.

Azpilicueta has been performing consistently at left-back and even scored a goal in their previous game versus Brighton. He should start ahead of Alonso and Emerson.

The French midfielder N’golo Kante has played every minute of Chelsea’s last eight games in all competitions and given his injury problems earlier in the campaign, he deserves a rest. Kovacic might get the nod against Burnley.

​ Jorginho more than held his own in an intriguing tactical battle with Brighton last weekend, once again proving that the Italian deserves to be recognized as one of the league’s best midfielders. Burnley will need to continue their high-intensity pressing from previous weeks in order to prevent the immensely talented Chelsea lynchpin from controlling the game.

Mount produced a somewhat subdued performance against Brighton. He must try to bounce back against Burnley and add to the five goals he has scored already this season.

Pulisic was missing for most parts of the game last weekend and the American must aim to bounce back against Burnley. Hudson-Odoi is waiting on the wings and the pressure is mounting on Pulisic.

Willian has been Chelsea’s best player during the Christmas period and will be a starter on the right flank.

The gruesome schedule might tempt Lampard to play Batshuayi up-front and give star striker Tammy Abraham a rest. 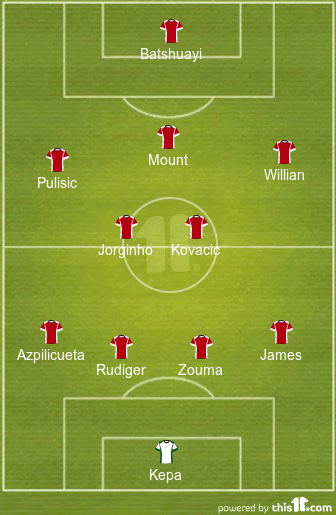