Manchester United were held to yet another draw against Aston Villa over the weekend. In their last league game, they secured a 3-3 draw versus Sheffield United and it has been a season to forget for the Red Devils.

While the pressure continues to mount on manager Ole Gunnar Solskjaer, the January transfer window would be the optimum time to add new players to the club. Reinforcements are needed in several positions across the squad and this could be a make-or-break period for Solskjaer.

A report by The Mirror (h/t Daily Mail) has claimed that United are lining up a £185m double raid to sign Erling Haaland and Jadon Sancho in January.

In addition, according to Goal (h/t Daily Express), United are also interested in signing Declan Rice from West Ham United. With that in mind, here’s how the club could potentially line up with these 3 players.

The goalkeeper continues to be an indispensable presence for the Red Devils.

The youngster has been impressive joining the club and he deserves a spot in the XI.

Despite a shaky start, Maguire is one of the best at the club and he cannot be replaced.

In recent times, the Swede has looked more confident alongside the former Leicester City man and should retain his spot.

The youngster has impressed in place of Luke Shaw and surely deserves a starting spot.

This would be the game-changer for United. With his controlled way of breaking up play and doing the dirty work, Rice is capable of working wonders in this position.

With Rice in the mix, McTominay would have greater freedom to roam forward and link the attack and the defence.

Pogba would finally get the much-needed license to solely focus on the attack.

Rashford has been one of United’s better players this season and he should retain his spot.

United’s lack of right-wing specialists truly hindered their attack but Sancho is capable of changing that.

After the failures of the likes of Romelu Lukaku and Anthony Martial, United would benefit from the presence of a deadly striker like Haaland. 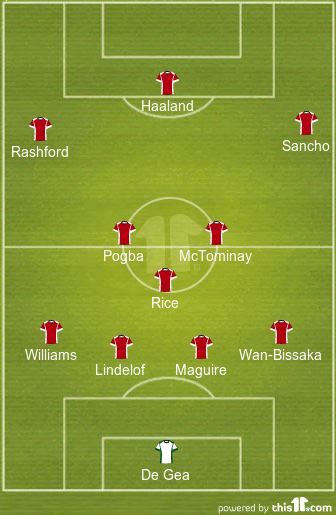