Celtic will host Dunfermline Athletic in the Betfred Cup on Saturday after a shock defeat at the hands of Romanian outfit CFR Cluj saw their Champions League dreams come to an end.

It’s been a difficult couple of days to get through so far but the Hoops have to bounce back with a convincing victory over Dunfermline Athletic to change the mood.

Neil Lennon could ring the changes for the weekend’s Betfred Cup tie.

Goalkeeper Scott Bain picked up a hand injury during the loss against Cluj but finished the game. However, he has now been ruled out for upto two months.

With Bain out injured, Gordon naturally comes back in goal for Saturday’s game.

Jullien, surprisingly, didn’t start in the embarrassing loss to Cluj. However, he is expected to come back into Lennon’s starting XI.

Like Jullien, Bitton was an unused substitute in the last game. With the Europa League play-off game against AIK coming up, Lennon could freshen things up by handing Bitton a start.

Ajer struggled against Cluj’s attackers on Tuesday but Lennon is expected to stick with the towering Norwegian.

With Hatem Abd Elhamed yet to fully get into the grips of the Scottish league, the Celtic boss could hand an opportunity to Anthony Ralston on the right.

Bolingoli has looked unconvincing at the back following his summer move from Austria Vienna. But he could be handed a chance to impress at left wing-back against Dunfermline.

Celtic’s leader on and off the pitch, Brown continues to play every game for the club under Lennon, and should start.

Though the partnership Ntcham and Brown didn’t work out against Cluj, Lennon could go with the same pair on Saturday.

Christie will add creativity and a punch of guile to the team. He will be raring to get on the score-sheet again.

With the Europa League game against AIK on the horizon, Lennon could freshen up his attack by bringing in Griffiths in place of Edouard.

Vakoun Issouf Bayo has struggled with fitness since joining the club in January. However, Lennon should give the pacey Ivorian a proper outing at home in the Betfred Cup game. 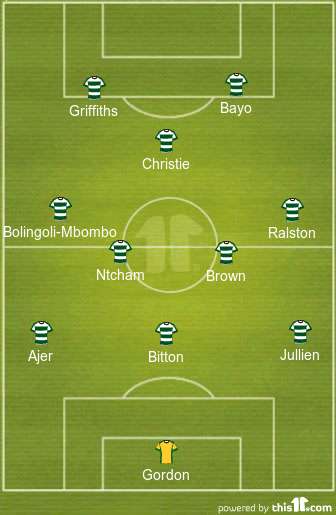