Aston Villa take on Derby County in the Championship play-off final on Monday hoping to cross the line this time around and achieve promotion.

The Villans are favourites heading into the finale having won both encounters between the two teams so far this season – by an aggregate score of 7-0.

But they’ll need to produce a better performance to win at Wembley after Dean Smith’s side huffed and puffed against West Brom in the semi-finals, particularly in the second leg at the Hawthorns.

Axel Tuanzebe limped off in the dying moments of extra time against West Brom, but he is expected to be fit ahead of the Wembley showdown.

Smith, meanwhile, has no fresh injury concerns ahead of the final.

Steer turned hero as he made crucial saves in the penalty shootout against West Brom. He is a certainty to be in goal in the final.

The Egyptian will have to be strong defensively to potentially keep Lawrence quiet on Monday.

Tuanzebe is being assessed on a regular basis after he hobbled off at West Brom but should be able to recover for the final at Wembley.

Mings has been a rock at the back and should partner Tuanzebe against Aston Villa.

The Welshman has been impressive for the Villans in the second half of the season and he should retain his place at left-back.

Hourihane started the second leg against West Brom and did very well. He’ll be preferred ahead of veteran Whelan in the holding role for the biggest game of the season.

Arguably Villa’s best player at the Hawthorns, McGinn’s presence will be crucial in midfield. The diminutive Scotsman adds a lot of energy and bite to the side, making him indispensable to Smith.

Grealish has been crucial behind Villa’s surge to the play-off final and he’ll be determined to lead from the front against Derby County.

Blessed with good pace, power and dribbling skills, El Ghazi will look to give a torrid time to the Derby defenders.

Green didn’t vindicate Smith’s selection against West Brom at the Hawthorns. Thus, that could see Kodjia start on the left at Wembley.

Abraham is Villa’s chief source for goals and he’ll be raring to make a mark in the Championship’s biggest game of the game. 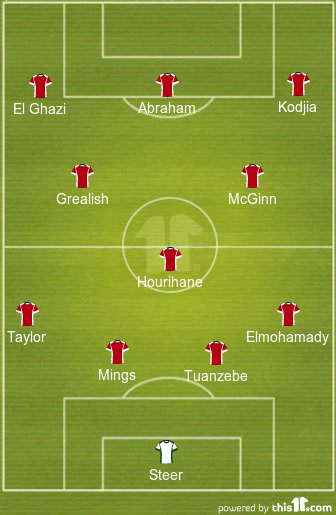