Derby County and Aston Villa face a trip to Wembley on May 27 to decide who will play in the Premier League next season.

The Rams secured an impressive 4-2 victory over Leeds United last week to claim a 4-3 aggregate win in the Championship playoff semi-finals.

Frank Lampard’s Derby County, however, will not have things easier during the final as they will be up against a very competent Aston Villa, who arrive at Wembley after defeating their Midland rivals West Brom in the last round.

After picking up a red-card during the game against Leeds, Scott Malone is suspended for the final.

Martyn Waghorn missed the second-leg against Leeds but is expected to be fit in time for the Wembley showdown.

The Dutchman is Derby’s first-choice goalkeeper and should start the final at Wembley.

Bogle has been excellent for the Rams this season, causing the opponents all kinds of problems with his overlapping runs and crossing abilities.

Keogh is a certainty in central defence for the Rams. He is expected to start the final against Aston Villa.

The Derby County Player of the Year has been a solid presence at the back. He would partner Keogh and look to keep the Villa attackers at bay.

Malone’s absence is likely to mean that Lampard will have to rely on the services of veteran Ashley Cole for the final.

Bradley Johnson was excellent in the second leg against Leeds, as he dictated the tempo of the game, broke up play and made smart runs inside the box. He is an undoubted starter on Monday.

Duane Holmes struggled to get in grips with the midfield battle against Leeds in the second leg. Hence, Huddlestone should replace him at Wembley.

Wilson is Derby’s chief creative spark and he’ll have to be at the top of his game to help his team defeat Villa in the final.

Mount was magical in the semi-final return leg at Elland Road. He is expected to start in his preferred no.10 role and cause problems for the opposition.

Lawrence didn’t impact much in the second leg against Leeds. Yet, he could be preferred ahead of the hardworking Bennett on the left wing.

Marriot was a game changer against Leeds last week, as his two goals helped the Rams advance to the final. He is an undoubted starter against Aston Villa. 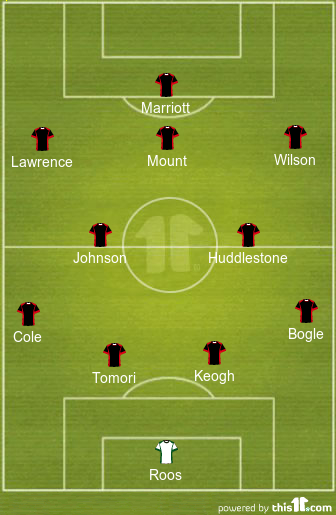