Southampton welcome Huddersfield Town at the St. Mary’s Stadium on Sunday in the final round of the 2018/19 Premier League season.

The Saints’ fortunes have seen an incredible turnaround since the arrival of Ralph Hasenhuttl, who replaced Mark Hughes at the club in December 2018. He has helped Southampton avoid relegation and will be hoping to end the campaign on a high.

Sunday’s visitors at St. Mary’s are relegated Huddersfield Town, who will aim to finish things on a positive note before going down to the Championship.

Maya Yoshida missed the last game against West Ham due to illness, but could return on Sunday.

Gunn has done well since replacing McCarthy as the club’s no.1 this season and should start again on Sunday.

Valery has enjoyed a breakthrough season at Southampton under Hasenhuttl. He is expected to continue at right-back.

The Pole has done well for the Saints and has been a regular since the arrival of Hasenhuttl. He is expected to start against Huddersfield.

With Vestergaard injured, Stephens could get the nod ahead of Yoshida to partner Bednarek in central defence.

A marauding left-back, Bertrand will look to stretch the Huddersfield defence with his overlapping runs.

Hojberg has been very good for the Saints in central midfield. His ability on the ball and interceptions skill will be extremely important for the hosts at the weekend.

Partnering Hojberg in central midfield will be Lemina, who brings a lot of aggression and bite to the Southampton engine room.

Redmond has been a star under Hasenhuttl and after coming as a substitute in the 3-0 defeat at West Ham, he could find his way back into the starting XI.

An underrated player in the Premier League, Ward-Prowse works extremely hard for his team and his versatility to play in various positions make him an asset.

Armstrong has had a good debut season since joining from Celtic and will look to end the term on a positive note.

Long will look to add more to his tally of five goals on Sunday when Southampton lock horns with Huddersfield Town. 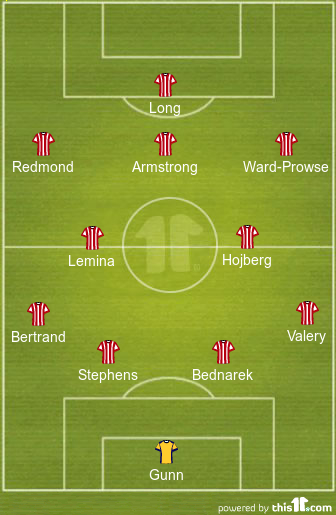