Derby County host Leeds United at the Pride Park in the first leg of Championship play-off semi-finals on Saturday.

The Rams were never higher than fourth in the table throughout the season and had to wait until the final round to confirm sixth place by beating West Brom 3-1 at home at the weekend. Nevertheless, they go into the play-offs on a run of three straight wins and five games without defeat.

Leeds United, meanwhile, missed out on automatic promotion and finished third on the table with 83 points.

Derby could be without Martyn Waghorn for the first leg against Leeds, as the forward picked up an Achilles problem in the 3-1 victory over West Brom.

Ashley Cole is suffering from a groin injury and remains doubtful.

The Dutch goalkeeper has done well replacing Carson as the no.1 and should retain his spot between the sticks on Saturday.

The 18-year-old has been outstanding for the Rams this season and is expected to start in his usual role at right-back.

Keogh has been a regular fixture at the back under Lampard and his presence at the weekend will be vital.

Tomori has formed a brilliant partnership with Keogh in the heart of Derby’s defence. He should continue at the back on Saturday.

In the absence of Forsyth, Malone has done a good job at left-back and should start ahead of the experienced Ashley Cole against Leeds this weekend.

There is every chance of Lampard selecting Huddlestone ahead of Johnson in the holding midfielder’s role. Huddlestone has bags of experience and his calming influence will be required in midfield against a pressing Leeds side.

Holmes picks up important positions to link up play between the midfield and the attack.

Mount is a clever operator of the ball, renowned for his creative passing and set-pieces prowess. He’ll definitely be a part of Derby’s three-man midfield.

Scored in the 3-1 victory over West Brom at the weekend and will be raring to make a mark against Leeds as well. The Welshman has enjoyed a highly productive loan spell under Lampard and deserves to keep his place in the team.

Lawrence has the ability to pick the right pass in the final third and also come up with crucial goals. He is set to start on the left wing.

With Waghorn expected to miss out, Lampard could go with Marriott to lead Derby’s attack against Leeds on Saturday. 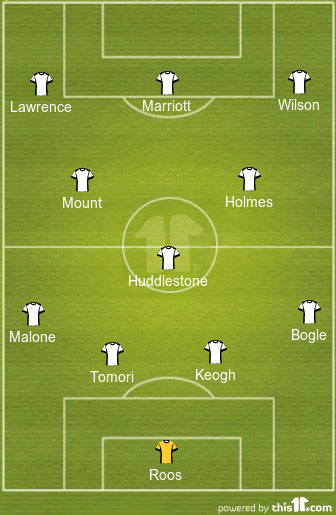