Manchester United play host to relegated Cardiff City on Sunday in the final game of their 2018/19 Premier League season.

The Red Devils have failed to qualify for the Champions League next season after they were held to a frustrating 1-1 draw by Huddersfield Town at the weekend.

Ole Gunnar Solskjaer’s side can now only finish in fifth position, but they must see off their Welsh opponents and hope that Arsenal do not defeat Burnley at Turf Moor.

Romelu Lukaku is carrying a hamstring injury and isn’t expected to recover in time to feature. Alexis Sanchez was taken off early in the second half against Huddersfield due to an ankle problem and he remains doubtful.

Meanwhile, Jesse Lingard, Antonio Valencia and Mason Greenwood all have an outside chance to be part of the squad.

De Gea has endured a torrid campaign in goal, but he’ll aim to end the season on a high.

Young has led the team for most of the season and that won’t change at the weekend too.

Jones has been in and out of the United team due to injuries and poor form. However, he’ll retain his place in the starting XI.

Undisputedly the team’s best defender this season, Lindelof will be raring to help the Red Devils keep a clean-sheet against a relegated Cardiff side.

It was his mistake that led to Huddersfield equalise at the weekend. Shaw, however, will be desperate to make amends in the final game of the season.

Fred has failed to justify his hefty price-tag in his debut season at Old Trafford. Solskjaer will hope the Brazilian finishes the campaign on a high.

The only bright spot since the past month or so, McTominay deserves to keep his place in the starting XI.

Pogba has gone off the boil of late, failing to influence games with his passing and leadership qualities. The Frenchman, however, will aim to end the season on a positive note.

Mata has done really well in the no.10 role, injecting creativity and a touch of guile to United’s attack. He is a certain starter against the Bluebirds.

There is a big chance of seeing Greenwood receive his first start for the club. The teenager is one of the exciting talents from the United academy and has scored a truckload of goals in the youth leagues this season.

Just like United’s other forwards, Rashford has been poor with his decision-making and finishing ability. Yet, Solskjaer could hand him a start in the final game of the season. 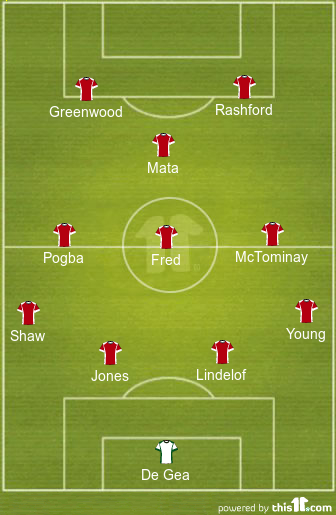