After finishing third on the league table with 83 points, Leeds United will face Derby County at Pride Park in the first leg of play-offs semi-final on Saturday.

The Whites looked certain to return to the English Premier League through automatic promotion after more than a decade, but as they managed only seven points out of the possible 21 since the last month or so, Marcelo Bielsa’s men have to win the play-offs now.

They’ll have to first negotiate Derby County, who finished on the sixth position with a 3-1 win against West Brom in their last match on Sunday.

Tyler Roberts was absent from the Ipswich Town defeat, but Bielsa said that he was confident that the forward would return for the play-offs.

Patrick Bamford was handed a two-match ban for simulation following an incident against Aston Villa. He served his suspension in the first game against Ipswich and will complete it with the trip to Derby County, meaning he will be able to return for the second leg at Elland Road.

Casilla had a horrible outing in the 3-2 defeat at Ipswich Town. He’ll be desperate to make amends at Pride Park at the weekend.

His form has been up and down in the past few weeks. Regardless of that, Ayling should keep his place at right-back.

The Sweden international is Leeds’ first-choice centre-back and is expected to start on Saturday.

The skipper will have to marshal his troops well as well as deliver a strong performance to help Leeds earn a positive result on Saturday.

With Douglas and Alioski out injured, Dallas will retain his place at left-back.

Phillips’s form has fluctuated since the last month or so. Yet, he’ll start in the first leg against Derby.

The Pole scored in the 3-2 defeat at Ipswich Town. He is expected to start again this Saturday, just like every other league game this season.

Adam Forshaw couldn’t really make an impact in the last game, yet he could get another shot at the weekend.

Hernandez is one of Leeds’ crucial players and he has to be in good form if Bielsa’s side are to finish the season well and prevail in the playoffs.

Despite being subpar for most of the campaign, Bielsa has kept his trust with Harrison and that is unlikely to change against Derby as well.

Roofe missed a penalty in the defeat at Ipswich. With Bamford suspended, he’ll be desperate to make amends and deliver the goods at Pride Park. 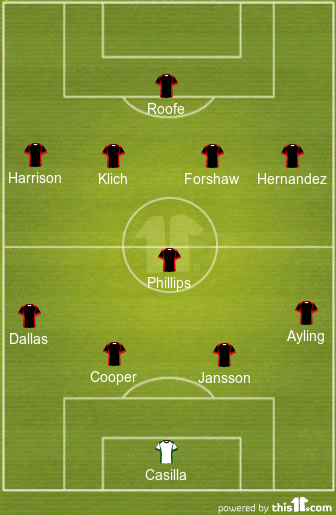