Liverpool welcome Barcelona at Anfield for the second leg of Champions League semi-finals on Tuesday hoping to turn the tables around and qualify for the final for the second season running.

The Reds trail 3-0 from the first leg, thanks to a Lionel Messi brace. But, Jurgen Klopp will go all out at the Catalan giants at home and will need his players to step up on Tuesday.

As far as their Premier League status is concerned, Klopp’s men hold a two-point advantage at the top of the table, although second-placed Manchester City have an extra game in their hands.

Mohamed Salah was stretchered off in the thrilling 3-2 victory over Newcastle United on Saturday after he collided with the hosts’ goalkeeper, Martin Dubravka. That makes him a doubt for the Barcelona game, as the club awaits the results of the tests.

Meanwhile, Roberto Firmino is ruled out of Tuesday’s Champions League game, as the Brazilian has been struggling with a muscle injury.

The Brazilian is the Reds’ first-choice keeper and is certain to be in goal on Tuesday.

Joe Gomez was preferred over Alexander-Arnold at right-back in the first leg but, the latter is expected to be recalled into the starting XI.

Matip has been really solid in the past couple of months and deserves to keep his place in the team.

Van Dijk is an irreplaceable cog in this Liverpool team and is a certain starter against Barcelona. He will have to be at his utmost best this time around to stop the Spanish giants from scoring.

The Scotsman will have to be at his very best to stop Messi at Anfield.

Fabinho protects the backline, breaks the opposition’s play and brings a calming influence to the team. He should start in his preferred holding role.

Henderson has done well in a slightly advanced role this season and should keep his place in the team.

Wijnaldum’s form has faded in the last few weeks but, Klopp is expected to stick with the Dutchman on the left of midfield trio.

If Salah did suffer a concussion at Newcastle, then he’ll miss the game against Barcelona which will pave the way for Shaqiri at right-wing. The pint-sized Swiss is more than capable of causing damage to the opponents with his speed and trickery.

The Senegalese star is an in-form player in front of goal for Liverpool. He would be looking to help the team qualify for the Champions League final for the second season running.

With Firmino ruled out, Sturridge could lead the Liverpool attack again, even though the 29-year-old was ineffective at Newcastle on Saturday. 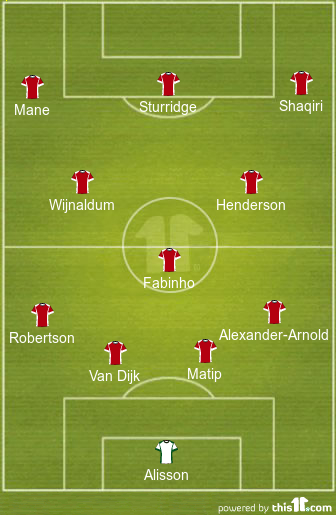