Tottenham travel to the Netherlands to face Ajax in the second leg of Champions League semi-finals on Wednesday, as Mauricio Pochettino aims to take his team to the finals of the competition.

Spurs have tasted defeat three times in the space of the past seven days in a disastrous run of form. Back-to-back 1-0 defeats against West Ham and Bournemouth in the Premier League were accompanied by the same result in the first leg against Ajax.

Only a win in the Netherlands will be sufficient to turn the tide and take Tottenham to their first-ever Champions League final.

Son Heung-min will be available for selection after serving his one-game suspension in the first leg.

Jan Vertonghen missed the defeat at Bournemouth due to a nose injury he suffered in the first leg against Ajax but, he will be available for the trip to Amsterdam.

Lloris has been Pochettino’s first choice this season and he is set to continue in goal on Wednesday.

Trippier has been very poor as per his standards this season and will have to be at his best to stop David Neres.

A rock at the back, Alderweireld has to dish out a strong performance if Spurs are to go through to the finals.

Formerly of Ajax, Vertonghen will be raring to help Spurs win at Amsterdam on Wednesday.

Despite playing the full game against Bournemouth, Rose could be preferred ahead of Davies at left-back.

Sissoko adds a lot of bite, tenacity and energy to the Spurs midfield. The Frenchman’s presence will be crucial against Ajax.

Wanyama had a really poor outing in the first leg but, he’ll be raring to put in a strong performance on Wednesday.

The Dane will again be Tottenham’s most important player. He’ll need to have a stellar game if Spurs are win at Ajax.

Son’s absence in the first leg was a huge miss for Spurs and his availability will give them a massive boost against Ajax on Wednesday.

The Brazilian has blown hot and cold this season. Yet, he could be a threat down the right-wing.

Llorente has done a pretty good job in Kane’s absence and Pochettino is likely to go with the big Spaniard up front. 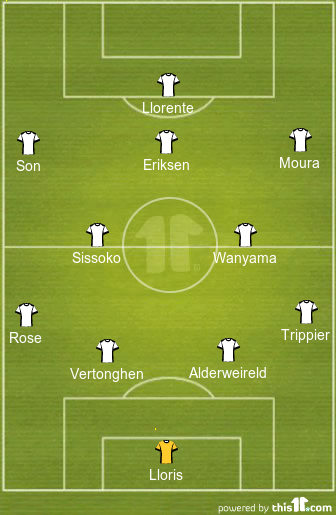