Manchester City welcome a tricky Leicester City side at the Etihad Stadium on Monday, as Premier League title race enters the final stage.

Defending champions Manchester City, after 12 straight wins, are on 92 points, one clear of Liverpool, who have lost just once in the league all season. It is an advantage to the Cityzens and Unibet bonus predicts it to be the greatest Premier League title race in history, with neither side having dropped points for two months.

However, Guardiola’s men have to be wary of Leicester, who are chasing European football and are fresh from thumping Arsenal 3-0 last weekend.

City will be without Kevin De Bruyne and Benjamin Mendy, while Fernandinho is doubtful following an injury against Manchester United.

Ederson is City’s undisputed no.1 and he is a sure starter on Monday.

The Englishman has been a consistent performer for City since his arrival this season and he is expected to continue in his preferred right-back role against Leicester.

Laporte is City’s first-choice central defender in the Premier League. He has been exceptional and is one of the main reasons why City have been sound at the back.

Partnering Laporte in central defence will be Kompany, whose experience and leadership skills could come handy against a tricky Leicester side.

Injury to Mendy has allowed Zinchenko to make the left-back spot his own this season. The young Ukrainian should retain his place in the team.

The German has been an integral part of Guardiola’s system and has done well in Fernandinho’s absence before. He should keep his place in the team on Monday.

Silva has been a consistent performer for Guardiola’s team, influencing games with his creativity and experience. He is a certain starter.

City’s standout performer this season and one of Guardiola’s most trusted men, Bernardo’s presence in midfield will be important in De Bruyne’s absence.

The German hasn’t had the impact he had last season but he still remains a crucial cog in Guardiola’s team. He will start on the left wing.

Among City’s best players this season, Sterling will be raring to give the Leicester defenders a run for their money on Monday.

A phenomenal striker on his day, Aguero bailed City out at Burnley with the only goal last weekend. He is an undoubted starter for the Cityzens in the upcoming fixture. 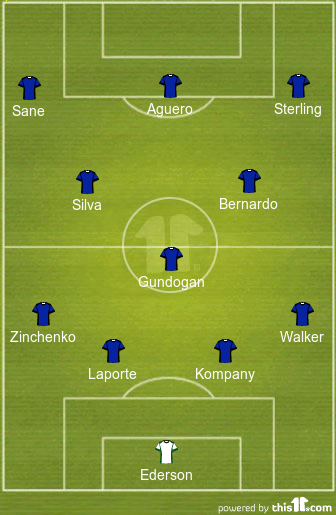