Liverpool will be hoping to extend their 19-game unbeaten streak when they head to Barcelona for their Champions League semi-finals first-leg tie on Wednesday.

The Reds thumped Huddersfield Town 5-0 on Friday in the Premier League which would have given them a lot of confidence before facing the Catalan giants.

Barcelona, on the other hand, come into the tie after clinching the La Liga title on Saturday against Levante.

Roberto Firmino missed the game against Huddersfield, due to a muscle tear he suffered in training but Jurgen Klopp feels his forward will be fit to face Barcelona.

Alex Oxlade-Chamberlain made his first appearance on Friday after recovering from the ligament injury he sustained last year and is expected to be part of the travelling squad. Fabinho has also been cleared to play in the upcoming game.

The Brazilian is the Reds’ first-choice keeper and should be in goal on Wednesday.

The youngster has been in decent form of late, especially when it comes to supplying assists from the wide areas. Huddersfield defenders should be wary of that.

Matip has been in fantastic form alongside Virgil van Dijk and deserves to keep his place in the team.

Van Dijk has revolutionized Liverpool’s defence and his presence is a must if the Reds are to stop Messi and co. at the Camp Nou.

The Scotsman is Klopp’s first-choice left-back and is a certainty to start on Wednesday.

Given the green signal to play after suffering a concussion at Cardiff City last week, Fabinho will start in the holding midfielder’s role.

Wijnaldum has been in good form of late, and his energy and tenacity in the midfield will be required against Barcelona.

The captain has starred since playing in an advanced midfield role. He will be expected to put in a big performance at Camp Nou.

The Egyptian star has been in good scoring form, which may not be good signs for the Huddersfield defenders on Friday.

Expected to be fit to face Barcelona, Firmino is one of the most important players for Liverpool and his presence keeps their tick over.

Mane has been unplayable for the majority of this campaign and would be raring to make a mark against the Spanish outfit. 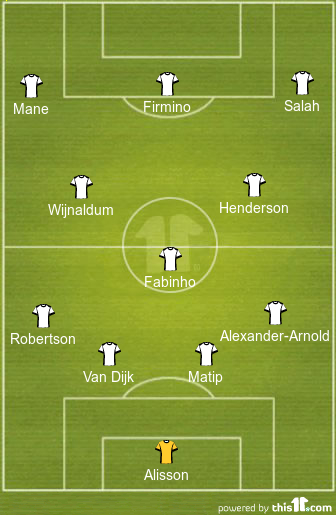 Pedro to start ahead of Willian? – Predicted 4-3-3 Chelsea XI to face Eintracht Frankfurt