Manchester United welcome Chelsea at Old Trafford on Sunday aiming to return to winning ways after the disappointment of 2-0 defeat at the hands of neighbours, Manchester City.

The Reds’ have endured a torrid time since Ole Gunnar Solskjaer was confirmed as the club’s new manager last month. They are looking to finish in the top four this season but will need to win their last three games to have a chance, starting from Chelsea.

Chelsea, meanwhile, are looking to finish in the top four as well as Maurizio Sarri expects a reaction after the 2-2 draw with Burnley on Monday.

Phil Jones missed the Manchester derby but could be back into contention for Sunday. Ander Herrera and Eric Bailly are also likely to recover from their injuries and make themselves available for selection.

He is United’s first-choice keeper and despite his poor form, the Spaniard should start.

Darmian was a shock selection in the Manchester derby, although he did vindicate Solskjaer’s decision. The Italian could get another chance at right-back on Sunday.

Smalling has blown hot and cold over the season but if the Red Devils are to win at the weekend, he’ll have to be at the top of his game.

The Swede is expected to partner Smalling this weekend and is arguably Manchester United’s best defender.

Returned to the starting XI against City after his suspension, Shaw had a tough time coping Bernardo Silva. The England international, however, will look to redeem himself against Chelsea.

Fred has improved under Solskjaer but needs to show more composure in possession and anticipation. He’ll start in the holding midfielder’s role.

He’s struggled over the last few weeks and couldn’t do much against a well-drilled City side. The Frenchman will aim to put in a solid show against Sarri’s Chelsea.

McTominay was an unused substitute in the Manchester derby but could be handed a start on Sunday. He has been doing a decent job in the midfield and should be rewarded with a string of appearances.

Sanchez came on as a substitute in the last few minutes against City on Wednesday. The Chilean, however, could be handed a start on the right wing.

Martial’s form has dipped massively since the last month or so. The Frenchman needs to find his mojo and help the Reds beat Chelsea at the weekend.

With Rashford and Lingard failing to deliver against City, Solskjaer could go with Lukaku up top on Sunday. 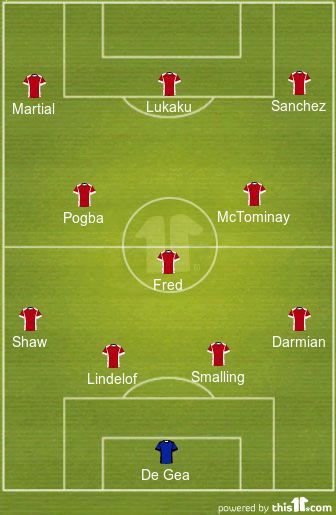