Sheffield United welcome Millwall to Bramall Lane on Saturday aiming to get back to winning ways in the Championship.

The Blades drew 1-1 with Birmingham City on Wednesday that left them with a point below second-placed Leeds United, who won at Preston. Chris Wilder knows the importance of automatic promotion and will prepare his side to take all three points against Birmingham.

Millwall are just two points above the final relegation place and will look to upset Sheffield United on Saturday.

Chris Wilder has revealed that Jack O’Connell could return back to the squad after missing the last two games with injury.

Henderson has been a reliable presence in goal for the Blades and should start against Millwall.

Baldock’s energy and intensity up and down the right make him such an important player for Wilder’s side.

Basham has been a regular presence in a three-man backline since the start of the season and is expected to keep his place in the team.

His calmness in central defence and leadership qualities make the Blades such a difficult unit to break down. Egan is a key player in this Sheffield United team.

Without O’Connell in the last two games, United’s defence have looked shaky and vulnerable. If the Blades are to earn promotion, O’Connell has to start all of the remaining games.

Stevens will return back to his original position at left wing-back following the return of O’Connell in the Blades’ three-man backline.

Norwood has been consistently good for United, impressing with his passing and tackling abilities. A certain starter at the weekend.

Fleck has been the perfect partner for Norwood in the middle of the park. He is one of the first names on the team sheet.

Duffy couldn’t impress in the 1-1 draw with Birmingham, so Wilder could hand the young Kieran Dowell a start in the no.10 position.

Sharp has been United’s chief source of goals this campaign. The veteran striker would be aiming to add to his tally of the season this weekend.

With 13 goals and three assists, McGoldrick is expected to continue partnering Sharp up front. 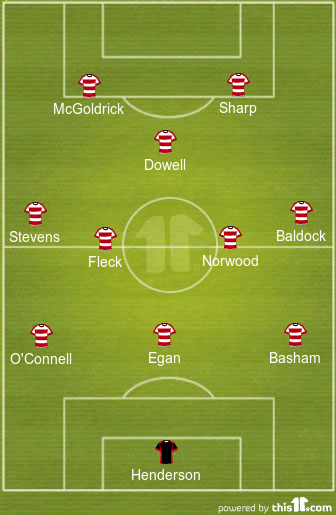