Leeds United take on Sheffield Wednesday at the Elland Road on Saturday as Marcelo Bielsa hopes to finish the season in the top two.

The Whites earned a 2-0 victory against 10-man Preston on Wednesday which has moved them to a point below second-placed Sheffield United, who drew 1-1 at Birmingham City.

However, Bielsa’s side cannot take Sheffield Wednesday lightly as the Owls have been rejuvenated since the appointment of Steve Bruce.

Marcelo Bielsa has no injury concerns ahead of the game against Sheffield Wednesday.

Casilla is Leeds first-choice keeper since arriving in the January transfer window. Hence, he is expected to start on Saturday as well.

Ayling had a positive game against 10-man Preston and will look to put in another impressive display when Leeds host Sheffield Wednesday.

The Swede has been solid this campaign and will look to continue his rich vein of form.

Cooper and Jansson have built a strong partnership at the back and the duo will be hoping to register a clean sheet against the Owls.

Alioski has done admirably well at left-back and Bielsa is expected to stick with the Macedonian on Saturday.

Phillips is one of the first names on the team sheet. He protects the backline very well and covers a lot of ground, making him such an important player for the Yorkshire club.

The Spaniard is Leeds’ most creative player and Sheffield Wednesday will have to especially keep an eye on him.

Roberts has to start influencing games consistently if he is to keep his place in the team. He is expected to start at the weekend, however.

Klich’s energy and passion for the team remains unmatched. He is an undoubted starter for the Whites.

Bielsa has shown immense faith in Harrison, despite the on-loan Manchester City starlet not performing at the top of his potential.

Bamford should have had a hat-trick at Preston but he managed to score a brace. He will be confident to get on the score-sheet in the weekend’s fixture. 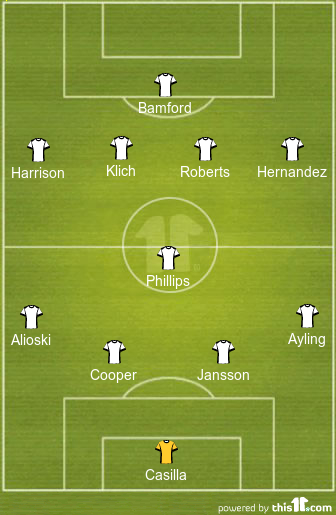