Norwich City travel to DW Stadium to take on Wigan Athletic in an early kick-off on Sunday.

The Canaries eight-game winning run came to an end on Wednesday when they were held to a 2-2 draw by Reading. Daniel Farke will be disappointed with how his team dropped points but he has to quickly shift his focus on the game at Wigan.

Wigan are 21st in the table, just two points above the drop zone and will certainly aim to stun Norwich City at the DW Stadium.

Emiliano Buendia will serve the second game of his three-game suspension at Wigan. Other than Buendia, Farke has no injury or suspension concerns.

Krul has played a big part in Norwich’s bid for promotion and should continue to keep his place in goal on Sunday.

Aarons has been in great form of late and should keep his place in the team against Wigan.

Zimmermann has been an influential figure in the Canaries backline. He should start the game on Sunday.

Scored a fantastic goal in the 2-2 draw with Reading and will be raring to have a few pops at the Wigan goal.

Lewis is a highly-energetic left-back who never stops running. The young gun is expected to keep his place in the team.

Trybull has established himself in the team with a series of consistent displays. His good form has kept the likes of Vrancic and Leitner out of the starting XI.

McLean continues to impress in the middle of the park for the Canaries. It’s very unlikely to see Farke disturbing the midfield pairing.

Stiepermann’s presence in the no.10 role will be crucial as he is capable of unlocking defences with his incisive passing and movement.

Cantwell couldn’t do much against Reading but will be given another opportunity on Sunday to express himself.

Hernandez is a tricky customer and on his day can be an unstoppable force.

Pukki missed a host of chances against Reading in mid-week. The Finn will look to redeem himself at Wigan on Sunday. 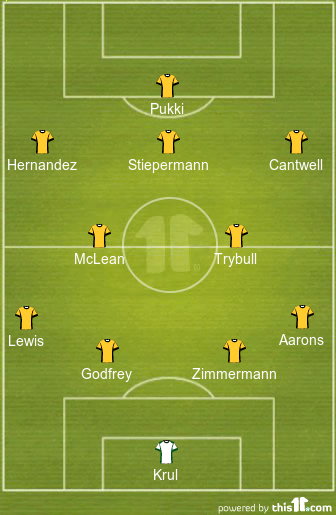