Norwich City will look to take one step closer towards the Championship title when they host Reading at Carrow Road on Wednesday evening.

The Canaries thrashed Queens Park Rangers 4-0 at home last weekend and will be looking to stretch their unbeaten run to nine games in mid-week.

Reading, the league leaders’ opponents are battling relegation and will be looking forward to spring an upset at Carrow Road.

Emi Buendia was shown a straight red card against QPR, meaning he’ll be suspended for the next three games.

Other than that, Daniel Farke has no suspension problems or fresh injury concerns ahead of Wednesday’s match.

A reliable presence in Norwich City’s team sheet this season, Krul should continue to keep his place in goal.

The revelation of the season, Aarons has been in great form of late and should start at right-back against Reading.

A rock at the back, Zimmermann is one of the first names on Farke’s team sheet.

Partnering Zimmermann in central defence will be Godfrey, who has been superb since the turn of the year.

Lewis has impressed Farke this season just like Aarons. He is expected to keep his place in the team.

Trybull has nailed down a regular place in the team, forming a solid partnership with McLean at the middle of the park.

McLean has done very well so far this campaign ever since he got a chance due to Vrancic and Leitner’s injuries. Despite Vrancic and Leitner now fully fit and raring to make a mark, Farke will go with McLean against Reading as well.

Scored in the 4-0 victory over QPR last weekend and will be keen to add to his tally on Wednesday.

Bunedia’s three-game suspension leaves a big hole on the right flank, considering how crucial he has been for the Canaries in their promotion chase. Cantwell could be a straight swap for Buendia as the academy graduate will look to impress his manager.

The Championship Player of the Season, Pukki will look to add to his tally against Reading after bagging a brace in the victory over QPR.

With his raw pace, power and flair, Hernandez will look to torment the Reading defence on Wednesday. 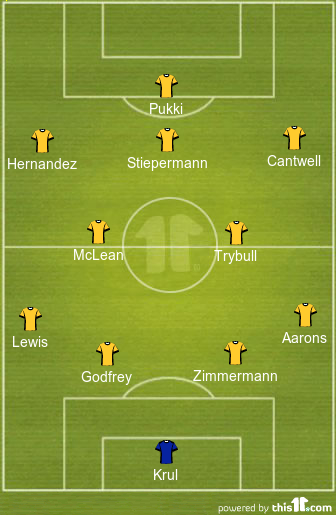