Manchester United welcome Barcelona at Old Trafford in the first leg of Champions League quarter-finals on Wednesday as Ole Gunnar Solskjaer has a chance to make the biggest statement.

Solskjaer’s tenure so far has been nothing short of incredible with a top-four Premier League finish which looked to be out of United’s sight now firmly in sight regardless of some recent setbacks. The Norwegian will hope to win the first leg against Barcelona and take a healthy lead to Camp Nou in the return leg next week.

Barcelona, meanwhile, are favourites in the quarter-finals and come into this game on the back of a 2-0 success against Atletico Madrid in the La Liga.

Marcus Rashford is available for Wednesday’s game after he missed the Wolves game last week with an ankle injury. Ander Herrera could also return but Antonio Valencia and Matteo Darmian remain doubtful.

Meanwhile, Luke Shaw is suspended for the first leg against Barcelona having picked up two yellow cards.

De Gea hasn’t had the best of seasons at Old Trafford but he remains United’s undoubted first-choice in goal.

Dalot has shown signs of promise and keeps the potential to become one of the top full-backs in the Premier League. He’ll start at right-wing back in mid-week, though.

Jones has been in and out of the team under Solskjaer but could start against the Spanish giants.

Smalling has been solid at the back but keeping Lionel Messi and co. at bay will be an uphill task on Wednesday. He’ll have to be at his best to help Manchester United keep a clean sheet in the first leg.

The Sweden international has been the club’s best defender and will look to deliver the goods on a big Champions League night on Wednesday.

The experience of Young would be required in a huge game against Barcelona, even though he has been poor in the last few games.

Matic’s form has dipped since getting injured in February. However, his experience and game-management skills will come handy against a top side like Barcelona.

Herrera’s industry, energy and leadership skills will be required if the Red Devils are to beat Barcelona in the first leg.

Pogba has been rejuvenated under Solskjaer but his form has dipped in the recent weeks. The Frenchman needs to find his form quickly and deliver a big performance at Old Trafford.

Rashford is Solskjaer’s main man in the attack and is expected to start against Ernesto Valverde’s side.

Partnering Rashford up front will be Lukaku, whose brace helped United knock PSG out in the last round. 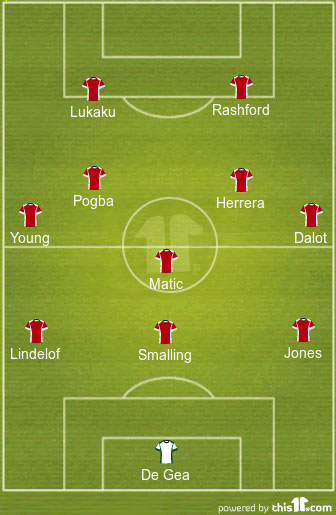